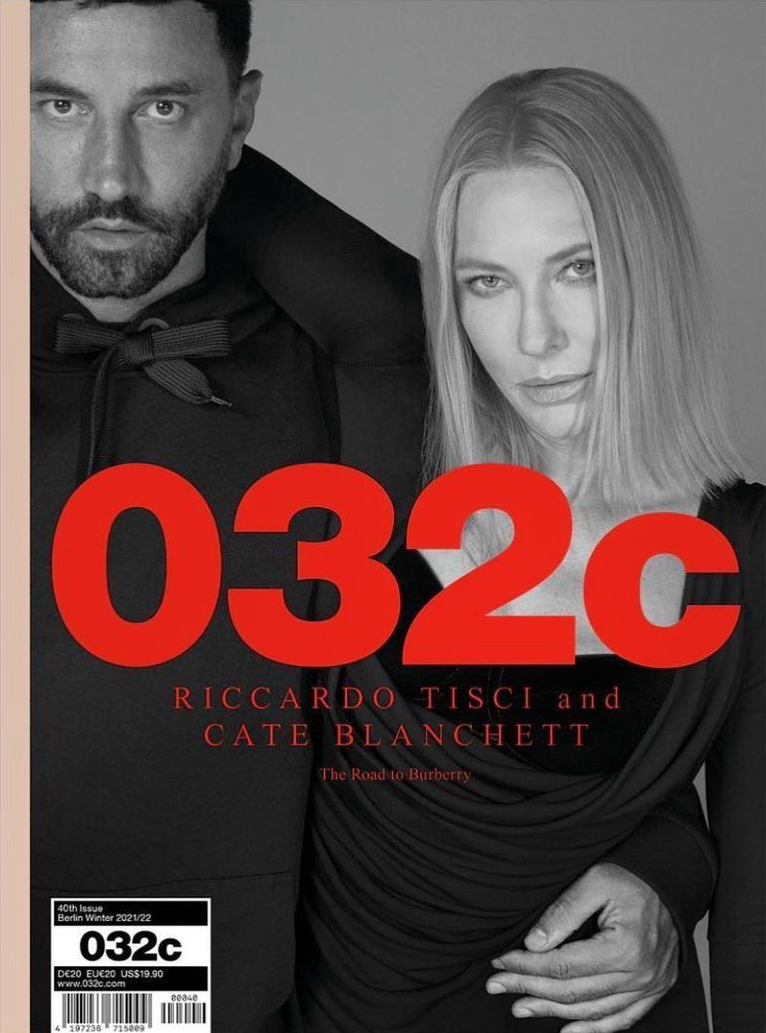 “People say I’m gothic, but I think of it as being in love.”

The 032c Issue #40 cover dossier, “The Road to Burberry,” explores how 47-year-old Italian creative director RICCARDO TISCI came to the 165-year-old British heritage label BURBERRY. Joining along the way are actress and two-time 032c cover star CATE BLANCHETT, photographers MERT & MARCUS, artist THOMAS JEPPE, and poet CACONRAD, for an 80-page journey charting the course of 21st century fashion. Elsewhere, two generations of UK Rap Royalty collide as SKEPTA and LITTLE SIMZ don Bottega Veneta in London for a shoot by GABRIEL MOSES. ILYA LIPKIN shadows the SUPREME team as they skate Berlin. Political scientist MARK LEONARD explains The Age of Unpeace – and how the global systems that once connected us have come to tear us apart. Bodies revolt in the works of German artist ALEXANDRA BIRCKEN, outerwear reaches peak genius in the hands of Moncler CEO REMO RUFFINI, and the films of MICHAEL MANN flood our world with blue in a treatise by MAHFUZ SULTAN. JORDAN BARRETT is airbrushed to bootlegged perfection for a countryside shoot with BRUNO STAUB and VITTORIA CERETTI sparkles in the night for VITO FERNICOLA in two features styled by MARC GOEHRING. Power duo ANA and DANKO STEINER couple architecture and desire. ANA OFAK revives the legacy of SVETLANA KANA RADEVIC, the unsung heroine of Balkan brutalism. Voices from the 032c cosmos reflect on the monstrous, alien, infectious, clairvoyant, shape-shifting, devious, and transcendent present in our new X-FILES section.

PLUS: Société de 032c would like you to meet TOM MCCARTHY, an expatriated British novelist; ALOISA RUF, a Pfaffenhausen Porsche fanatic; FABRIZIO PRESTINARI, the best news agent in Milan; SPENCER PHIPPS, a menswear entrepreneur with a start-up in Paris (and a heart in San Francisco); MARJA KARAN, an arts patron and soap star from Belgrade; and DJ Kobosil, a Neukölln native producer turned apparel designer. We end the issue as we did the last: with our favorite books of the season, assembled in our BERLIN REVIEW.

And, because more is always more: 032c Issue #40 maxes out with a special edition booklet featuring a conversation between artists YE (formerly KANYE WEST) and TINO SEHGAL.