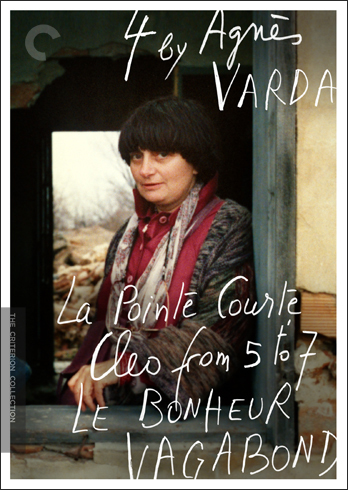 Agnès Varda used the skills she honed early in her career as a photographer to create some of the most nuanced, thought-provoking films of the past fifty years. She is widely believed to have presaged the French new wave with her first film, La Pointe Courte, long before creating one of the movement’s benchmarks, Cleo from 5 to 7. Later, with Le bonheur and Vagabond, Varda further shook up art-house audiences, challenging bourgeois codes with her inscrutable characters and effortlessly beautiful compositions and editing. Now working largely as a documentarian, Varda remains one of the essential cinematic poets of our time and a true visionary.

Le bonheur, 1965
Though married to the good-natured, beautiful Therese (Claire Drouot), young husband and father François (Jean-Claude Drouot) finds himself falling unquestioningly into an affair with an attractive postal worker. One of Agnès Varda’s most provocative films, the art-house hit Le bonheur examines, with a deceptively cheery palette and the spirited strains of Mozart, the ideas of fidelity and happiness in a modern, self-centered world.

Cléo from 5 to 7, 1962
Agnès Varda eloquently captures Paris in the sixties with this real-time portrait of a singer (Corinne Marchand) set adrift in the city as she awaits test results from a biopsy. A chronicle of the minutes of one womans life, Cléo from 5 to 7 is a spirited mix of vivid vérité and melodrama, featuring a score by Michel Legrand (The Umbrellas of Cherbourg) and cameos by Jean-Luc Godard and Anna Karina.

La Pointe Courte, 1956
The great Agnes Varda’s career began with this graceful, penetrating study of a marriage on the rocks, set against the backdrop of a small Mediterranean fishing village. Both a stylized depiction of the complicated relationship between a married couple (played by Silvia Monfort and Philippe Noiret) and a documentary-like look at the daily struggles of the locals, Varda’s discursive, gorgeously filmed debut was radical enough to later be considered one of the progenitors of the coming French new wave.

Vagabond, 1985
Sandrine Bonnaire won a César award for her portrayal of Mona, a defiant young drifter who is found frozen in a ditch. Using a largely non-professional cast, famed New Wave filmmaker Agnès Varda recollects Monas story through the flashbacks of those who encountered her, producing the splintered portrait of an enigmatic woman. Told in sparsely poetic images set against the frozen landscape of mid-winter Nîmes, this is Vardas masterpiece. Criterion presents Vagabond (Sans toit ni loi) in a brilliant color transfer supervised by the director.