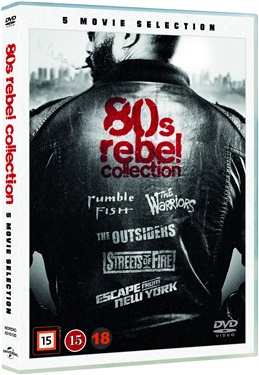 Rumble Fish
Rusty James can’t live up to his brother’s reputation. His brother can’t live it down. This is an atmospheric rites-of-passage tale featuring many members of the so-called eighties Brat Pack, among others Mickey Rourke & Matt Dillon. Directed by Francis Ford Coppola.

The Warriors
A battle of gigantic proportions is looming in the neon underground of New York City. The armies of the night number 100,000; they outnumber the police 5 to 1; and tonight they’re after the Warriors a street gang blamed unfairly for a rival gang leader’s death.

The Outsiders
Based on the novel of the same name. The story of young men growing up facing hard times where they have little going for them. Two opposing groups, the Greasers and the Socs, continually fight against each other and their turf.

Streets of Fire
Directed by Walter Hill (48 Hours) comes this rock n roll saga about a mercenary (Michael Paré) who is hired to rescue his ex-girlfriend (Diane Lane), a singer who has been kidnapped by a motorcycle gang.

Escape From New York
In 1997, when the US President crashes into Manhattan, now a giant maximum security prison, the convicted bank robber and anti-hero Snake Plissken (Kurt Russell) is sent in to rescue him from the hands of the terrorist The Duke (Isaac Hayes)