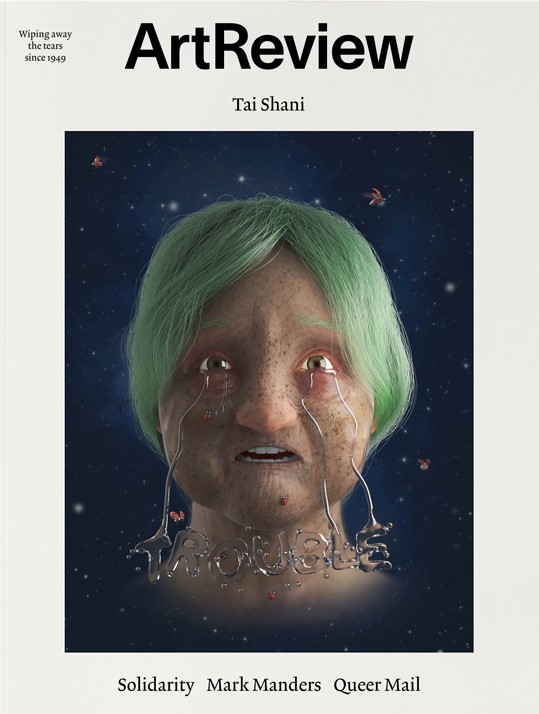 Published monthly, Art Review is a constant glance at what is leading the contemporary art world. It guides new and established movements, styles and personalities with an expert look at artists, collectors, galleries, auctioneers, curators and critics.

In the face of COVID-19, and the various injustices it has unmasked and exposed, the rarefied world of art has been quick to adopt a rhetoric of togetherness. The new issue of ArtReview asks: what does solidarity look like in a discipline that traditionally privileges individual expression?

Addressing this topic directly, Dave Beech, in a concise cultural history, looks at the possibilities for the practice of solidarity among artists, and between artists and other groups, imagining how one would best go about successfully organising and channelling such energies. He is not necessarily optimistic: ‘Solidarity based on debate is harder to imagine than solidarity based on identity in this epoch of fragmented solidarities, conditional alliances and specified communities.’

Cover artist Tai Shani is no stranger to acts of solidarity. For this issue she presents a script for a new work, a virtual-reality play about family (among other things) that combines trajectories drawing on the personal, the mythological, the cryptic and the literal.

Coming together takes other forms too: with postal services in the US and the UK facing existential threats, Oliver Basciano looks at the role they played in the development of mail art and how this artform allowed LGBT individuals to connect and queer communities to develop across geopolitical boundaries; and Patrick Langley tracks the use of the telephone in sound art.

Some artists, of course, are naturally lone wolves, and Ross Simonini, after seven years of trying to get the interview, finally meets one such eccentric character: the American painter Josh Smith, who confesses that he has gone six months holing up in his studio, without engagement with the outside world, adding that this “would be a worst-case scenario, and it’s not healthy”. For some communities, too, seclusion has long been a means of survival. Fi Churchman considers the photographs of Brazil-based artist-activist Claudia Andujar to argue that photography, in this case powerful images of Brazilian indigenous societies under existential threat from the outside world, has the capacity to project art beyond the cathedrals of culture, into the layspace of everyday life. Which is precisely where the Dutch artist Mark Manders wishes to see his art – as at home in a supermarket as in a gallery, he says, in a text by Craig Burnett.