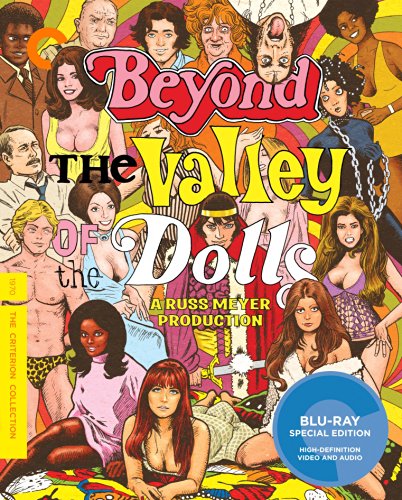 Beyond the Valley of the Dolls (Blu-Ray)

In 1970, Twentieth Century-Fox, impressed by the visual zing “King of the Nudies” Russ Meyer had been bringing to bargain-basement exploitation fare, handed the director a studio budget and the title to one of its biggest hits, Valley of the Dolls. With a satirical screenplay by Roger Ebert, Beyond the Valley of the Dolls follows three young female rockers going Hollywood, in hell-bent sixties style, under the spell of a flamboyant producer—whose decadent bashes showcase Meyer’s trademark libidinal exuberance. Transgressive and outrageous, this big-studio version of a debaucherous midnight movie is an addictively entertaining romp from one of cinema’s great outsider artists.

Special features:
– High-definition digital restoration, with uncompressed monaural soundtrack on the Blu-ray
– Audio commentary from 2003 featuring screenwriter Roger Ebert
– Audio commentary from 2006 featuring actors Dolly Read, Cynthia Myers, Harrison Page, John LaZar, and Erica Gavin
– New interview with filmmaker John Waters
– Episode from 1988 of The Incredibly Strange Film Show on director Russ Meyer
– Q&A about the film from 1992 featuring Meyer, Ebert, LaZar, and Read; and actors David Gurian, Charles Napier, Michael Blodgett, and Edy Williams, with host Michael Dare
– Interview with cast members from 2005
– Above, Beneath, and Beyond the Valley; Look On Up at the Bottom; The Best of Beyond; Sex, Drugs, Music & Murder; and Casey & Roxanne, five documentaries from 2006 about the making of the film, featuring the cast and crew
– Screen tests
– Trailers
– PLUS: A booklet featuring an essay by film critic Glenn Kenny and excerpts from a 1970 account in the UCLA Daily Bruin of a visit to the film’s set