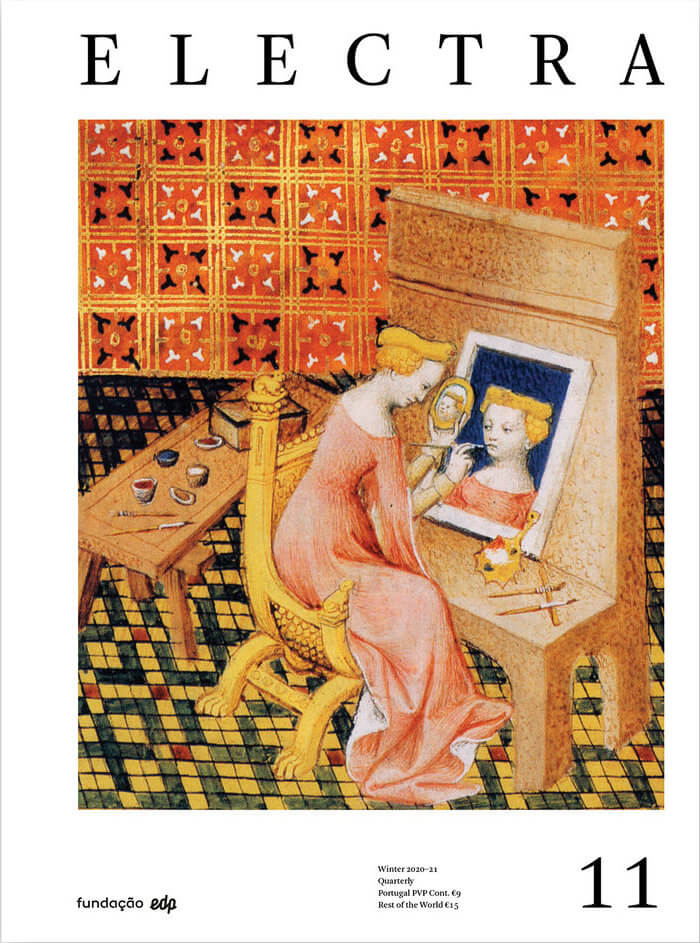 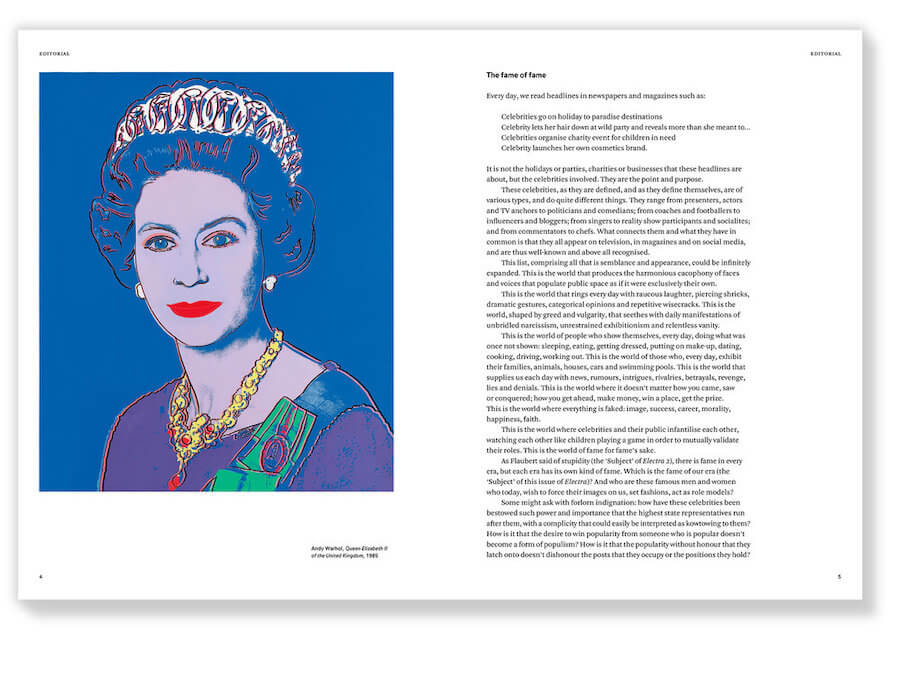 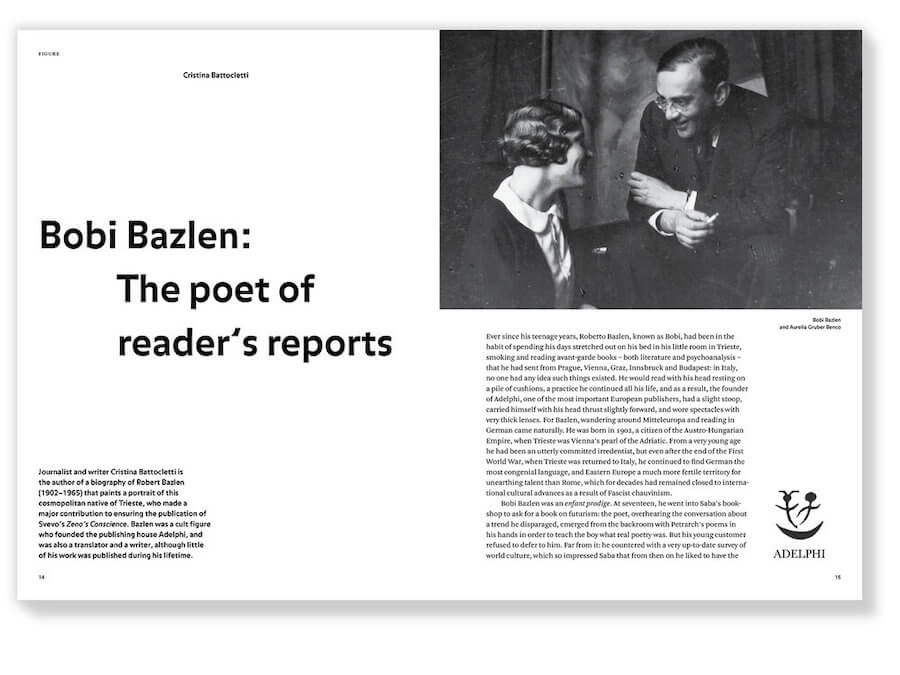 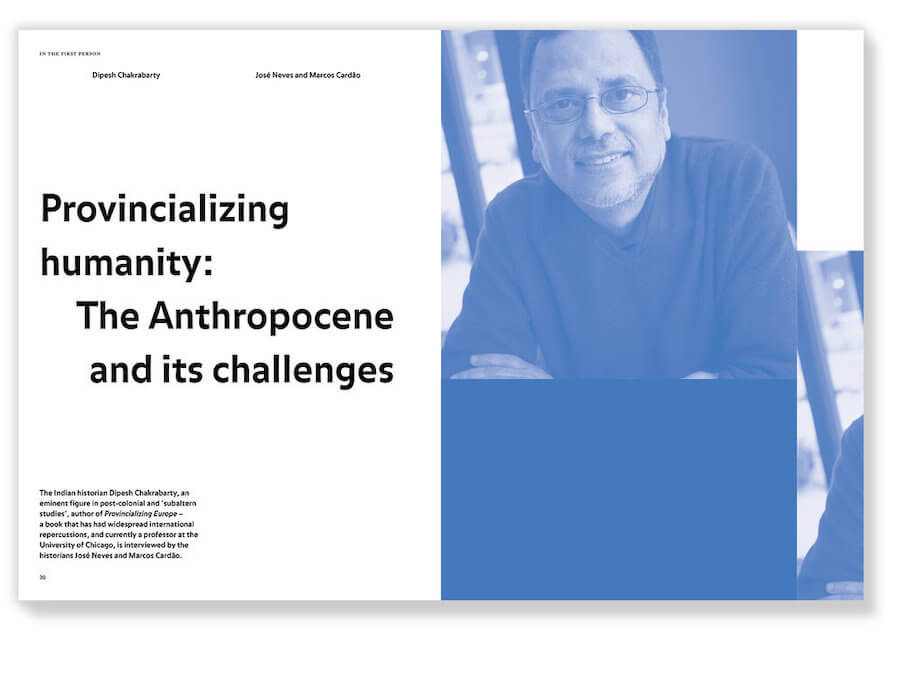 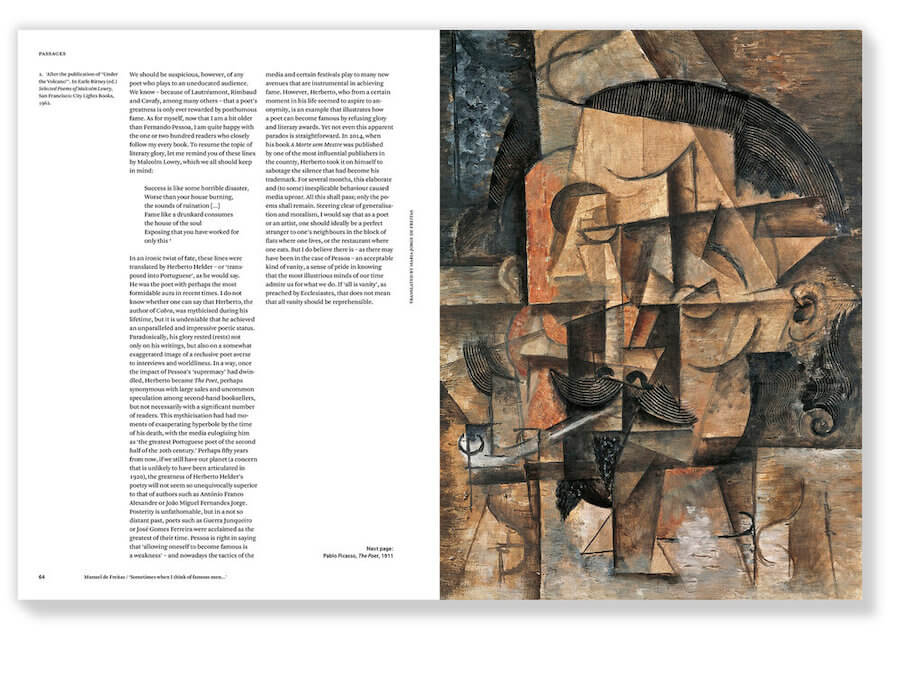 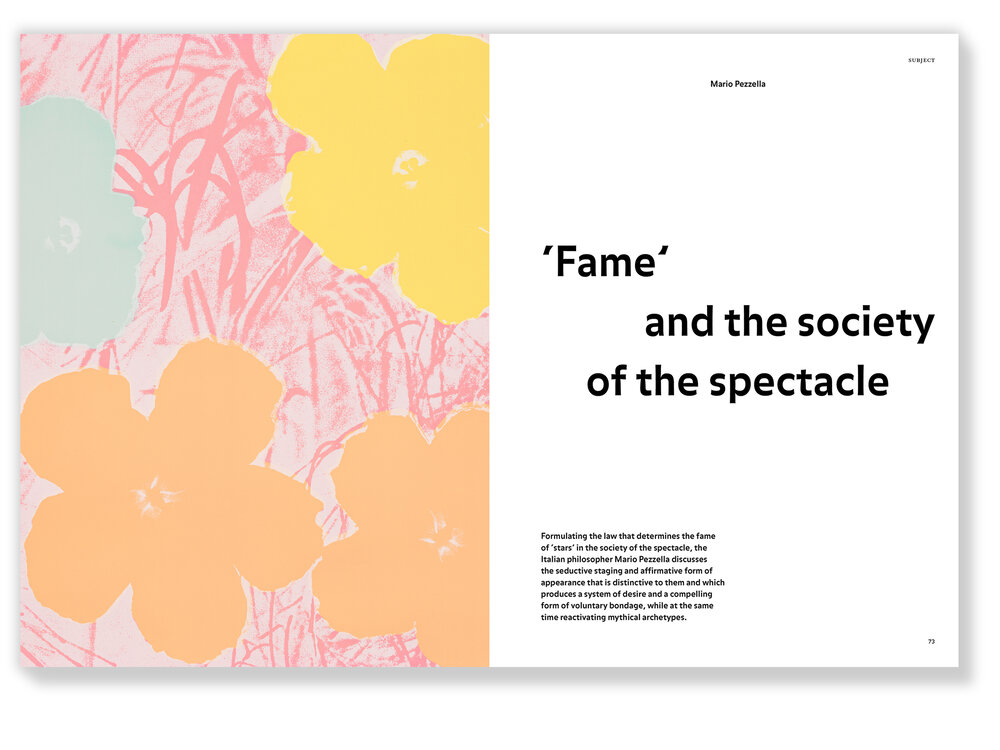 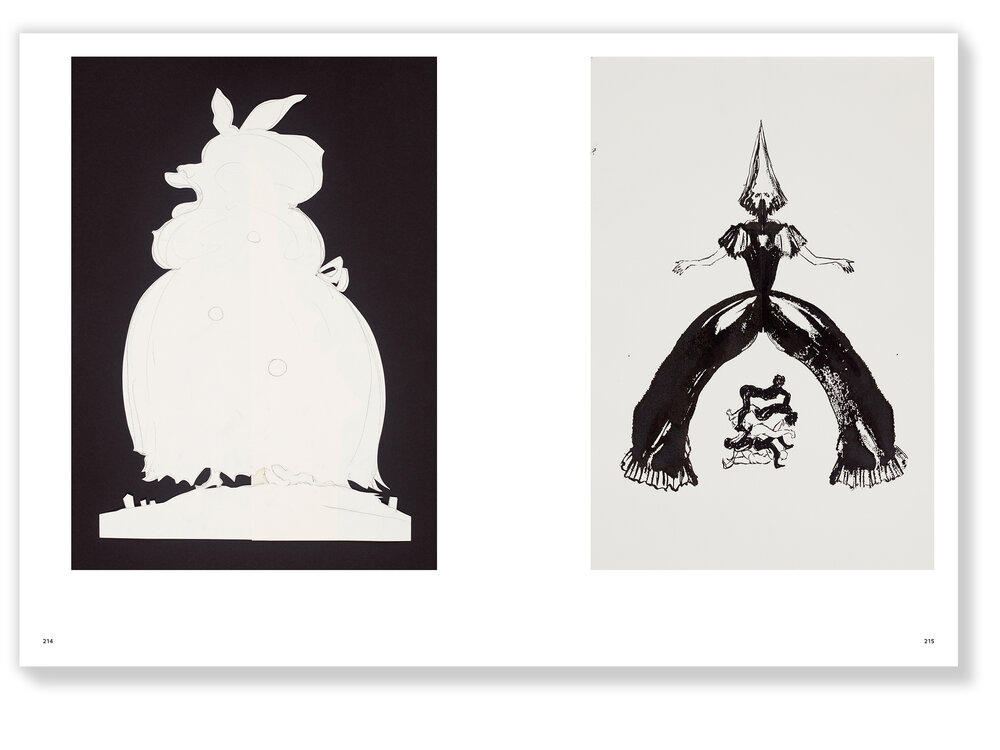 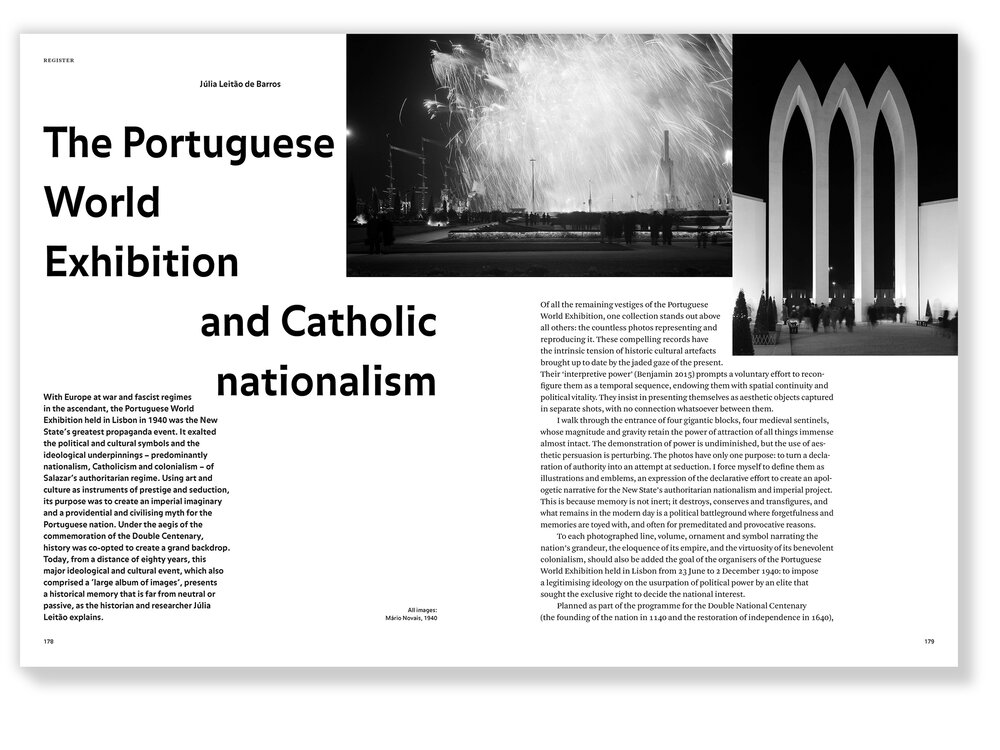 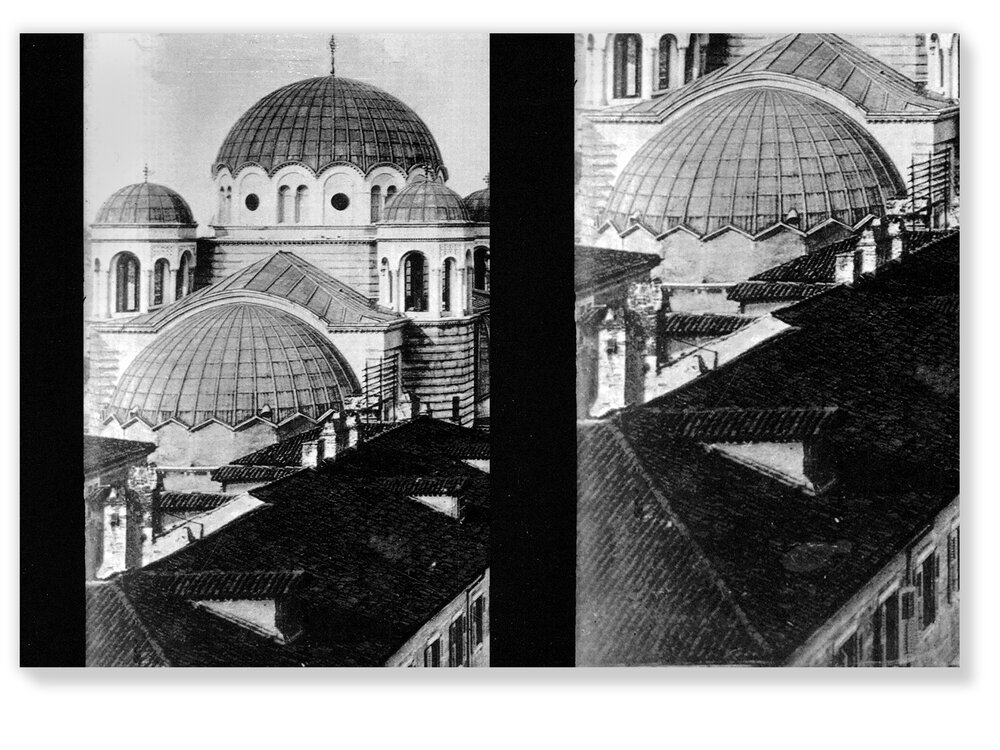 Electra is an international periodical dedicated to all areas of culture, promoting dialogue between different artistic disciplines, humanistic knowledge and science, cultural theories and practices.

In this issue:
What does fame mean in our time? And who are these famous men and women who now want to impose their image, set trends, be models? Fame is the topic of the dossier in issue 11 of Electra. Today, in a society of widespread communication, fame is an aspiration that does not require justification by way of achievements or exceptional works because the act of appearing and being famous on a large scale has become an end in itself. Famous people, celebrities, personalities, stars: here is a vast constellation of famous figures, veritable social actors who now cross our universe at great speed and in an ephemeral way. This dossier brings together texts by Mario Pezzella, Laurent de Sutter, Éric Marty, João Pacheco, Rita Figueiras, Robert van Krieken, Barry King and António Guerreiro, and it is illustrated with images by Julia Wachtel and Andy Warhol.

In the section “In the First Person”, Indian historian Dipesh Chakrabarty, an eminent figure in post-colonial studies and the author of a book that has had profound international repercussion, Provincializing Europe, is interviewed by historians José Neves and Marcos Cardão.

Kara Walker, one of the most prominent contemporary artists, is the author of this edition’s “Portfolio”. Using questions of gender and identity, or subjects such as racism or violence as a starting point, this artistic work approaches them in their complexities and contradictions. The works presented (ink, graphite and watercolour drawings, paper collages, clippings), which are accompanied by a text by Sofia Steinvorth, were selected by the artist from her personal archive.

The section “Scoop” reveals original works by one of today’s most renowned photographers, South African Jo Ractliffe. These photographs were taken in Angola, in geographical areas ranging from the port of Luanda to the neighbourhood of Boavista and the Roque Santeiro market. In an essay written for this edition, Afonso Dias Ramos presents the artist and the work that she chose for Electra.

In this eleventh edition of Electra, Luiz Feldman, Brazilian professor and diplomat, analyses and confronts the visions of Brazil as conceived by sociologist Gilberto Freyre and historian Sérgio Buarque de Holanda; Italian journalist and writer, Cristina Battocletti, outlines a portrait of Robert Bazlen, founder of publishing company Adelphi, translator and writer with very few published books, who became a cult figure, and she visits the city where he was born, Trieste, birthplace of an extraordinarily rich cultural and literary scene; poet Manuel de Freitas comments on a chronicle by Fernando Pessoa about the celebrity status; film director Anthony El Chidiac writes about love and sex, freedom and threat, life and death, in a journal travelling between Lebanon and Argentina; historian and researcher Júlia Leitão de Barros revisits the Portuguese World Fair, which took place in 1940, in Lisbon; urban planner and geographer Jacques Lévy is interviewed by Sofia Steinvorth and talks about cities, people and their daily lives, open societies, democracy and “serendipity”; the third and final instalment of the collaboration between writer Gonçalo M. Tavares and the artist-architect collective Os Espacialistas is published; and journalist António Costa Santos writes about the word “super”.