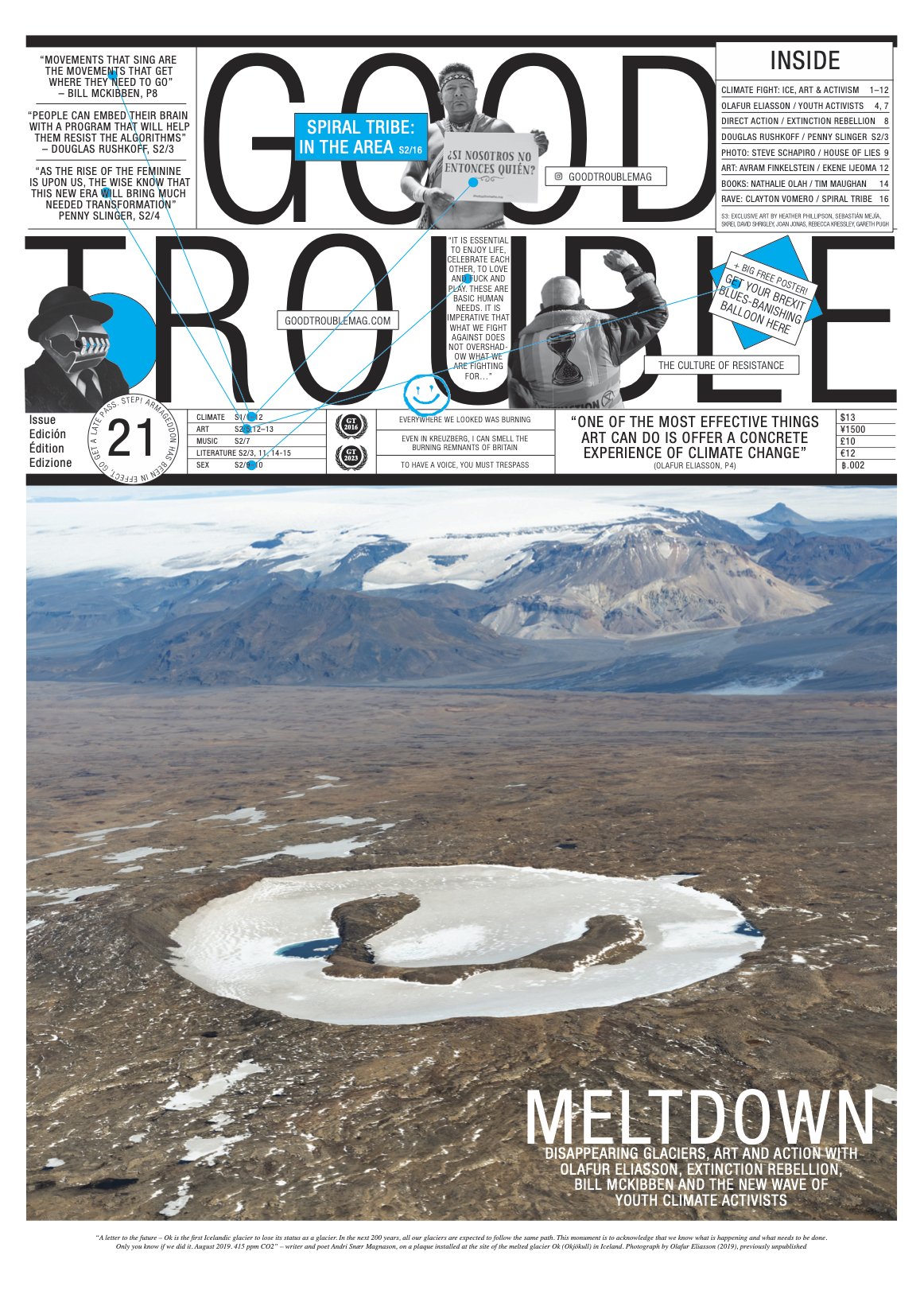 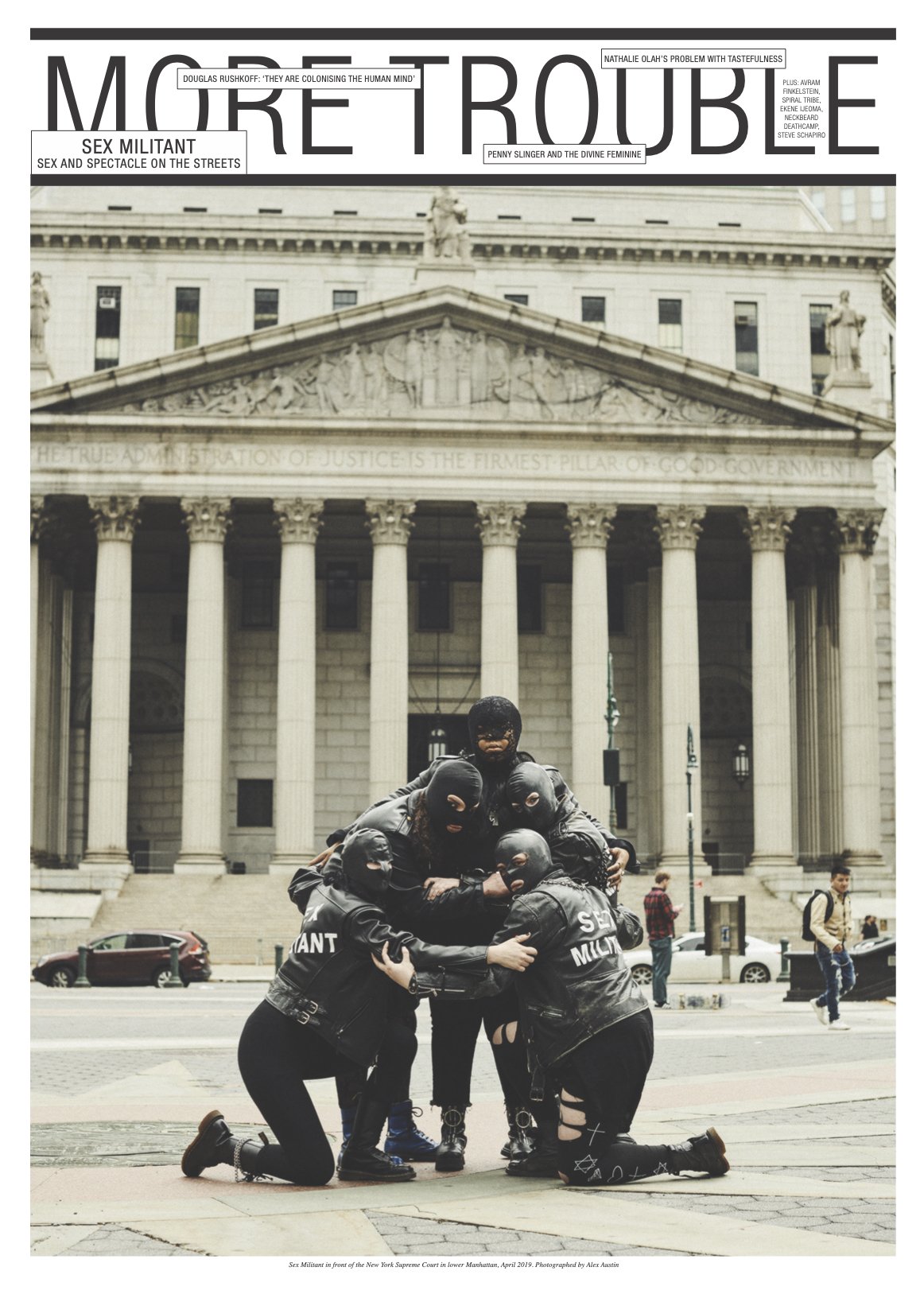 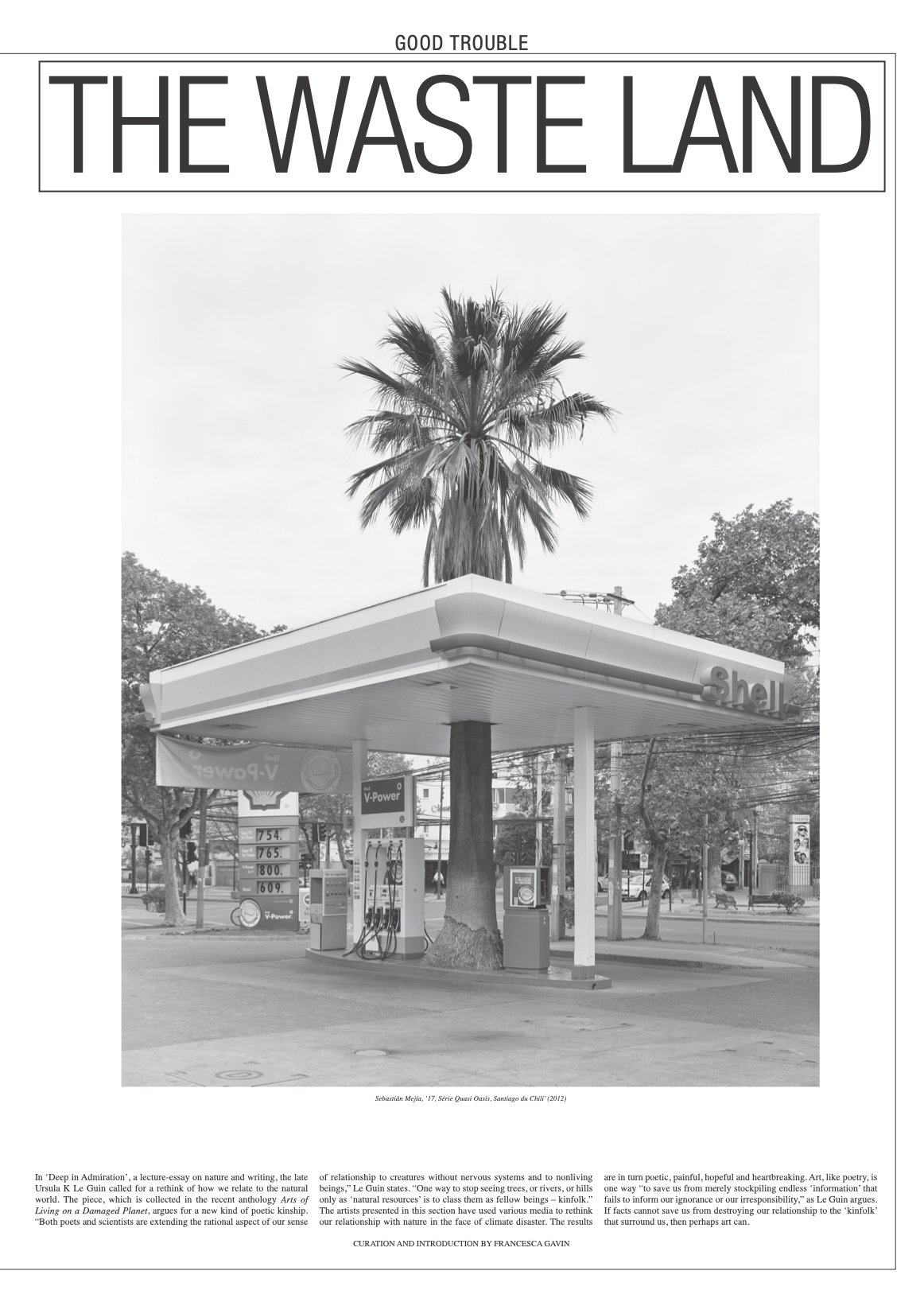 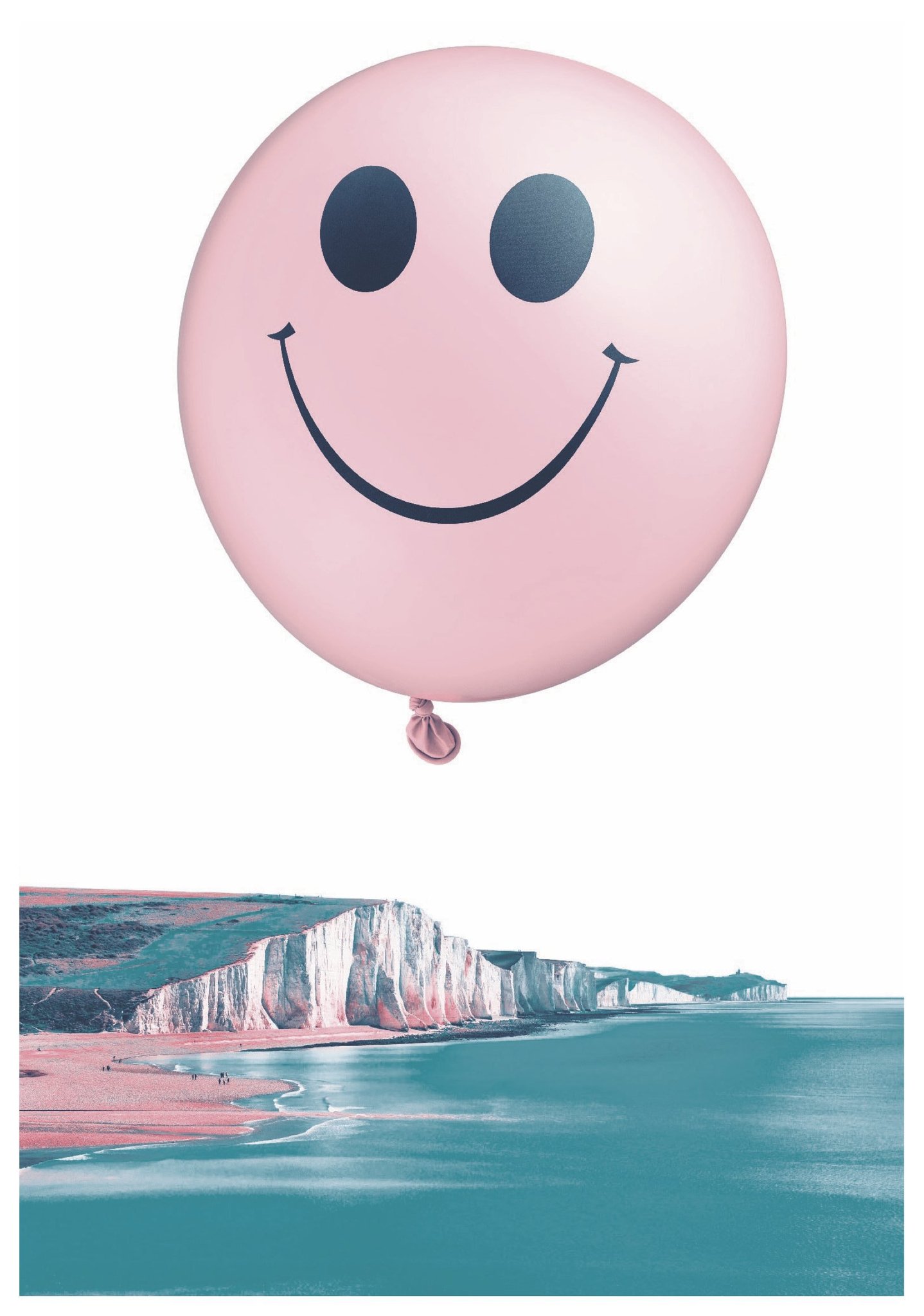 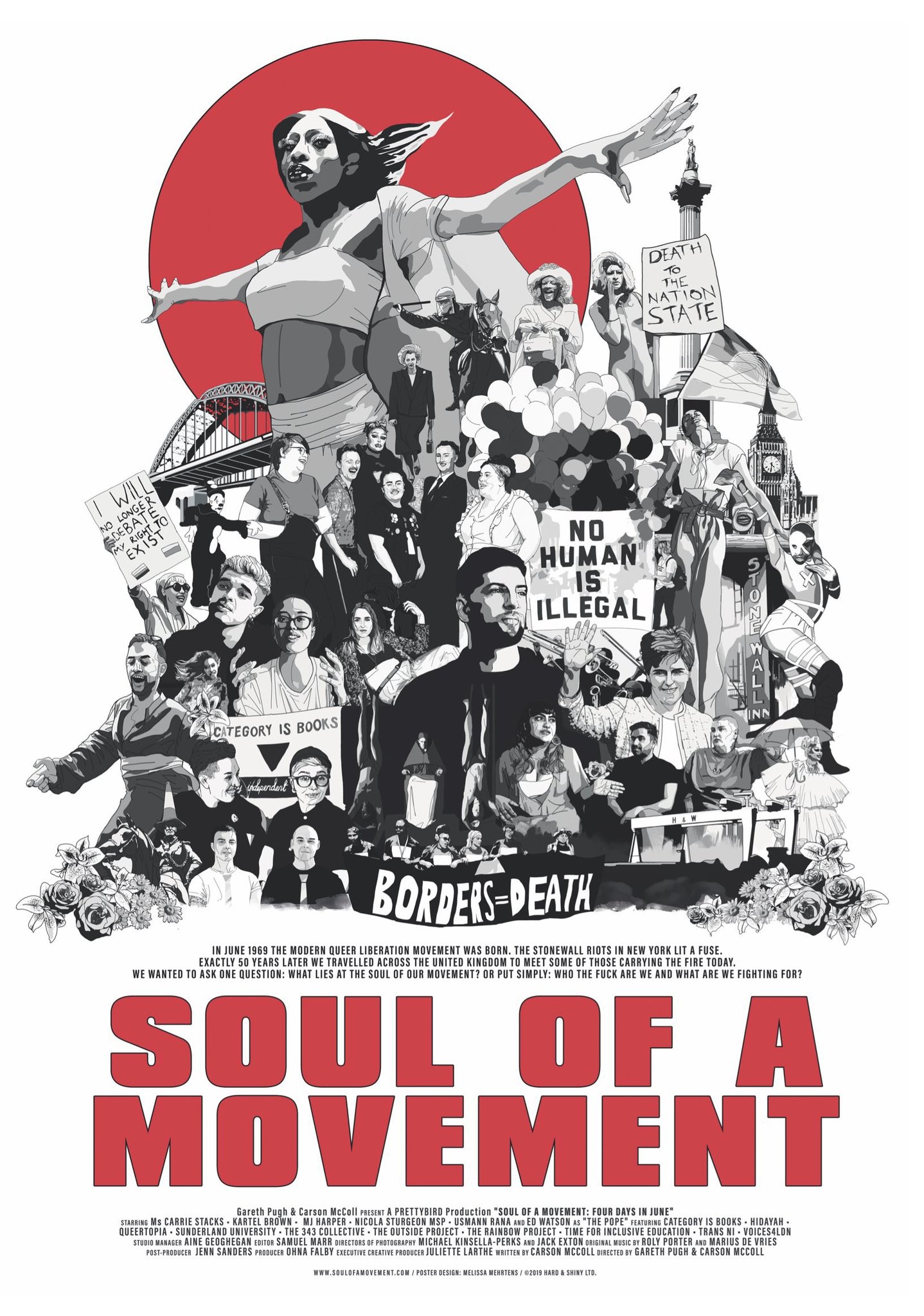 Good Trouble celebrates the culture of resistance, publishing stories from the intersection of arts and culture with politics and protest.

DIY activist-arts broadsheet GOOD TROUBLE returns with its third issue,  with a massive 44 pages of art, protest and creativity, plus a big poster. (NB: Price in dollars because we are based in NYC, but this ships from UK. One copy: p&p in UK FREE, $4 Europe, $10 US & rest of world. Multiple copies priced by weight.)

With a special focus on the climate crisis, a dedicated section includes the likes of Olafur Eliasson, Extinction Rebellion and Bill McKibben (founder of  350.org), as well as the new wave of youth climate activists, Jakob Kudsk Steensen’s augmented-reality art, indigenous leaders, and large-scale photographs of humanity’s effects on the planet by Edward Burtynsky.

The cover is a previously unpublished image from Olafur Eliasson’s Glacier Series (1999/2019), showing the remains of Okjökull, the first Icelandic glacier to disappear and lose its status because of global warming.

There’s also artwork by David Shrigley, Heather Philipson, Joan Jonas, SKREI and Sebastian Mejia, as well as a double-sided pull-out with Scott King’s ‘Balloon for Britain’ and an exclusive poster for Gareth Pugh’s ‘Soul of a Movement’ documentary. Plus radical K-Pop, antifascist black metal, Spiral Tribe, and all the usual Good Trouble nonsense like a curious recipe for leftover terrine.

Since November 2016, Good Trouble has published stories from the intersection of arts and culture with politics and protest. In August 2017, Good Trouble launched a limited-edition print publication: Issue 23, an ‘epic 12-page broadsheet of art, protest, creativity and resistance’, designed by Richard Turley. Issue 22 followed in 2018, expanding to 32 pages, and was awarded Magazine of the Year at the UK’s 2018 Stack Awards. Issue 21 is its third issue. No, it doesn’t really make sense.