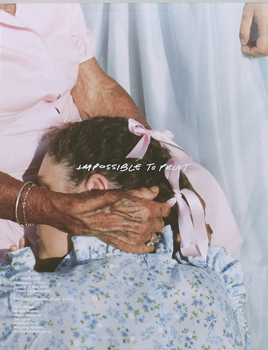 Combine this with beautiful photos and carefully curated imagery, all of which is entirely advert free, and you have yourself a paper that is really rather special.

This is a limited edition (200) series of Impossible to Print, cellophane wrapped, with a signed original print from photographer Benjamin Tietge.

In this second issue, THE FUTURE IS FEMALE/POWER OF PRINT, we are focusing on womanhood: women’s rights, matriarchal cultures, femininity in architecture and gender identity. A tribute the power of the poster and print, the magazine has tear off photography throughout by Mayan Toledano, Lily Cole and Maxine Walters.

Interviews in this issue include, David Attenborough on climate change as a women’s rights issue, Nick Tree describing aboriginal matrilineal tradition in Australia and Tea Uglow discussing her transition from Tom to Tea. The political interplay of the poster and print are also explored with Robert Montgomery, Wolfgang Tillmans and Jefferson Hack. Plus, Mark Boyle describes – through handwritten pencil letters – living without technology.