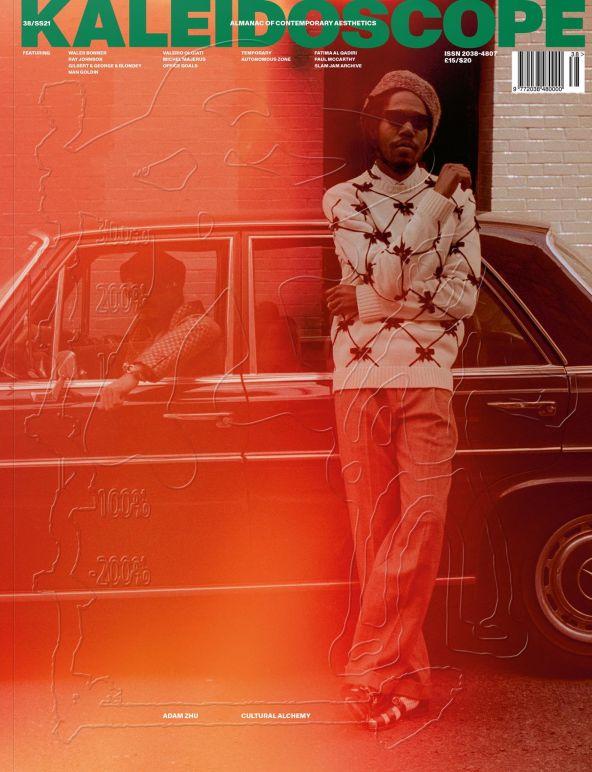 The release of KALEIDOSCOPE’‘s new issue #38 (spring/summer 2021), coming with a set of six covers:

Designer Grace Wales Bonner talks to Rhea Dillon about elevating Blackness within fashion, looking back to her Caribbean heritage in search for beauty, nature, and spirituality. The inspirations behind her latest collections, a trilogy exploring Britain and the Caribbean as a diasporic journey, resonate beautifully in an extensive photo story shot by Marc Asekhame.

An extensive trend report titled Office Goals addresses the office intended both as a physical space and a powerful symbol of organized labor, providing an opportunity to question contemporary methodologies of working—from automation, neoliberal dystopias and the all-you-can-work freelance economy, to elevated ideas of “everywhere studio.” Within this frame, Alessio Ascari interviews Hans Ulrich Obrist, the epitome of the globetrotting curator, about how the 7 pandemic affected his workflow, driving him to prioritize research and a decentralized approach. The report also comprises an essay by Alessandro Bava, a visual timeline by Jonathan Olivares, and a roundtable of architects and designers with ANY, Paul Cournet, Fredi Fischii & Niels Olsen, Josh Hiola, and Oana Stanescu.

Celebrated artist duo Gilbert & George, famously challenging taboos and moralism in the art world and society alike, are pictured by Chris Rhodes in the company of pro skater and multi-hyphenate Blondey McCoy—with whom they engage in an unapologetic chat about Britishness, religion, the monarchy, happiness, drugs, gentrification, and how to stay normal and weird.

Associated with Gulf Futurism, art collective DIS, fashion brand Telfar, and filmmaker Mati Diop, composer Fatima Al Qadiri photographed by Charlie Engman) meets with Courtney Malick on the occasion of her newly-released solo album, which stems from an adolescent fantasy and chooses melancholy as a space for spiritual growth.

A special, limited-edition cover introduces a series of new drawings by LA artist Paul McCarthy (photographed by Daniel Regan, Interview by Massimiliano Gionl), In which the scrapes the bottom of the barrel, conjuring up cheap psychology, mind-altering drugs, Trump, Hitler, and Hollywood populism, to expose the American pathology.

ABSTRACT, our text-only editorial segment dedicated to urgent research questions of our time, critically embraces the notion of counterculture, looking at it from different angles: the phenomenon of protests and the role of pleasure; the disintegration of civilized society and psycho-deflation; Detroit techno as aliberation technology. Through three essays by Michelle Lhoog, Franco “Bifo” Berardi, and DeForrest Brown, Jr., the magazine becomes a Temporary Autonomous Zone in its own right—one in which “the only possible truth is change” (Timothy Leary).

Akeem Smith: No Gyal Can Test, a special supplement created in partnership with Red Bull Arts, traverses the slippages between memory, the archive, and history, excavating the personal photographs and videos entrusted to the artist over the past decade by various family members, friends, and pivotal figures of Kingston’s dancehall community.