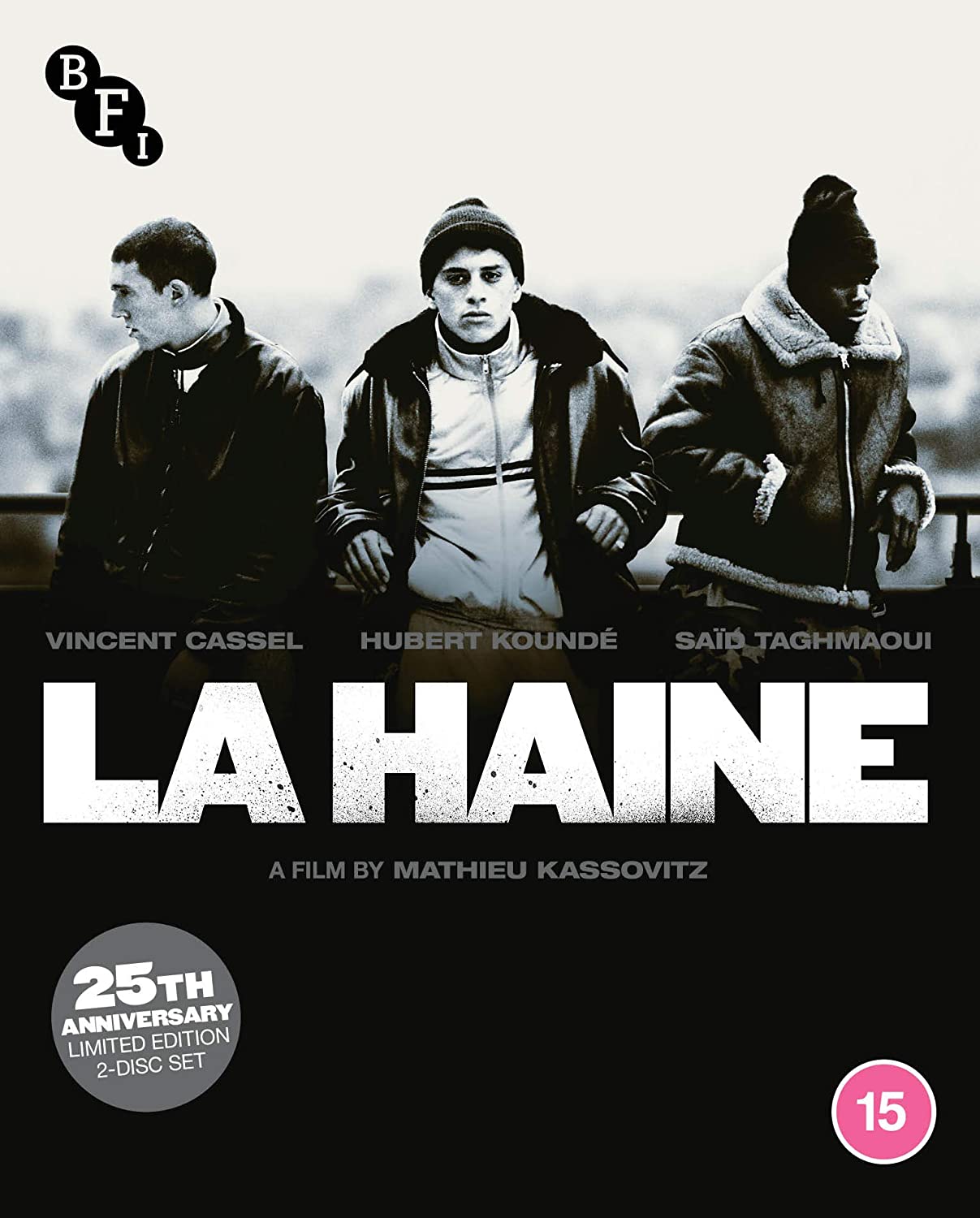 Turning the camera away from iconic Paris to the concrete banlieue, Mathieu Kassovitz’s second film as a director changed the cultural landscape of French cinema when it landed at the Cannes Film Festival in 1995, where it won the prize for Best Director. Taking place over 24 hours following the police shooting of a young man, Kassovitz shows the world through the eyes of three friends, Arab, Jew and Black, frustrated at politicians and the media excusing police brutality. The black-and-white visuals, thumping hip-hop soundtrack and graffiti-lined streets underscore the urgency and rebellion at the heart of this game-changing classic.

Audio commentary by Mathieu Kassovitz (2004)
–
Redefining Rebellion (2020, 5 mins): Film critic and programmer Kaleem Aftab explores the spirit of revolution in La Haine
–
Screen Epiphany: Riz Ahmed introduces La Haine (2020, 14 mins): the award-winning actor talks about his connection to Mathieu Kassovitz’s La Haine
–
Interview with Mathieu Kassovitz (2020, 35 mins): a new interview with the actor, writer and director
–
Fierrot le pou (1990, 7 mins): a young man shoots hoops (or tries) in a gym, in an effort to impress a young woman
–
Cauchemar blanc (1991, 10 mins): a group of guys cruise the streets looking for someone to rob
–
Assassins (1992, 12 mins): Mathieu Kassovitz’s short film which he would later develop into the feature Assassin(s) in 1997
–
10 Years of La Haine (2005, 84 mins): feature length documentary marking the 10th anniversary of Mathieu Kassovitz’s award-winning film
–
Casting and rehearsals (1995, 19 mins)
– Anatomy of a Scene (1995, 7 mins): a look at the shooting of a particularly challenging scene in the film
– Behind the scenes (1995, 6 mins): Kassovitz and his cast and crew prepare to embark on making La Haine
– Colour deleted and extended scenes (1995, 17 mins): including afterwords by Mathieu Kassovitz on selected scenes
– Original trailers
– 25th anniversary trailer
– 80-page book featuring new essays by Ginette Vincendeau and Kaleem Aftab, an interview with Mathieu Kassovitz, archival essays and reviews and more
– Limited edition of 5,000 copies