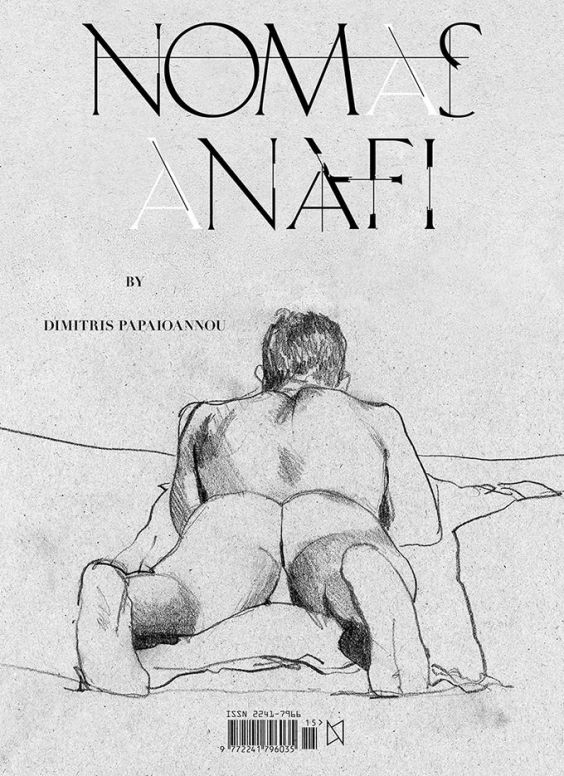 Nomas magazine gazes at people and places with the curiosity, the joy and the longing of a nomad, the desire to belong, even for a while, to another culture.
Every issue explores a different destination, or a theme. The magazine is the common ground for photographers, artists, writers and creative wanderers who share the same passion, for experiencing and documenting travel narratives about the unseen and the untold.
Nomas is a limited edition that shapes a contemporary perception in Art and the travel culture industry, through its most comprehensive, best curated and researched content.

With two separate destinations, Anafi and Olympia, NOMAS 15 is for the first-time publishing two issues which displace conventional ideas of travelling. In the Anafi issue, the unique island is approached solely through a journey in the mind of a single person, the versatile artist Dimitris Papaioannou; in the issue about Olympia, we explore the common ground between ancient civilization and technology, at the place where the ideas of solidarity and athleticism were first combined to give birth to the Olympic Games.

NOMAS – ANAFI encapsulates the island as seen through the eyes of the world-renowned artist Dimitris Papaioannou. We are proud and moved to publish the summer journal of such an important creator,  through which Papaioannou’s perpetual dialogue with the human body and on a second level with nature continues. The sketches are accompanied by a text by the poet, writer and translator Vassilis Amanatidis and an article on Anafi by Dimitris Politakis.

Dimitris Papaioannou started as a comic artist but established himself as one of the greatest directors, choreographers and performers of our time. In 2004 he became world famous as the creator of the Opening and Closing Ceremonies for the Athens Olympic Games. His new work, Transverse Orientation, is currently on tour in major theatres across Europe.

NOMAS ANAFI is published with the support of Onassis Stegi.

The digital platform on Olympia, created by Microsoft in collaboration with the Greek Ministry of Culture, raised the question of whether technology can re-animate the past, through augmented reality, allowing us to revisit traditional and timeless values. This ancient-contemporary dichotomy is embraced and explored in NOMAS OLYMPIA through the photographs of Yannis Bournias, who draws inspiration from the fractured statues of the Museum. The same photographs would later inspire the German Creative Director, Mirko Borsche, to design a new font, exclusive to this issue. Lastly, the photographer Marco Argüello captured with his lens the rhythm of life in the areas surrounding ancient Olympia. Can the past be revived in the present with the help of the future? This and other questions are answered in discussion with Brad Smith, President and Vice Chair of Microsoft, Paola Antonelli, MoMA’s Director of Research & Development and Senior Curator in the Department of Architecture & Design, John Wilkins, Emeritus Professor of ancient history at the University of Exeter and Maria Nafpliotou, twice high priestess of the Olympic flames, among others.