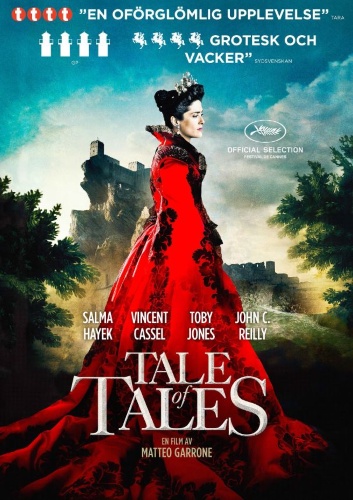 Hailed as a masterpiece at the 2015 Cannes Film Festival, Tale of Tales is a sumptuous, seductive and macabre re-telling of Giambattista Basile’s classic Italian fairy tales by renowned director Matteo Garrone (Gomorrah, Reality).

Comprising three wildly fantastical stories, including a queen who gives birth after eating a sea monster’s heart, an old peasant woman who finds youth after falling asleep in an enchanted forest and a proud king who raises a flea as his child, these are tales that your parents never dared tell you. Set in an epic landscape filled with a host of bizarre characters (played by a stunning ensemble cast of Salma Hayek, John C. Reilly, Vincent Cassel, Toby Jones and Stacy Martin), this outlandish, grotesque and beguiling fantasy world is like nothing you’ve seen before.

Gloriously shot, with a spine-tingling soundtrack by Oscar-winning composer Alexandre Desplat (The Grand Budapest Hotel, Rust & Bone), Tale of Tales is a lavish production from the makers of High-Rise and Sexy Beast. Deliciously dark, wickedly funny and outrageously entertaining, these adult-only fairy tales are a breathtaking work of cinematic escapism.