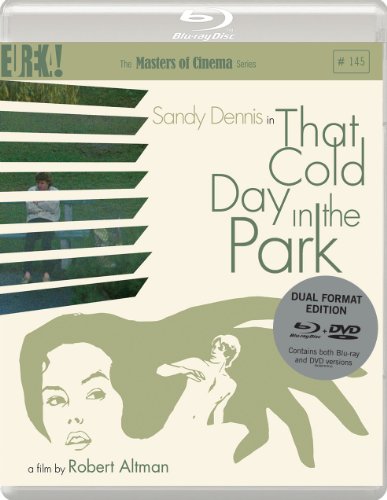 That Cold Day in the Park (Dual Format Edition)

How far will a 32 year-old virgin go to possess a 19 year-old boy?
Just prior to his career breakthrough M*A*S*H, Robert Altman made this memorably unsettling psychological thriller, which originally premiered at the Cannes Film Festival.

Frances Austen, a young, wealthy spinster, invites a mute teenager into her apartment after finding him freezing in the park next to where she lives. Despite her best efforts, their lack of communication only increases her sense of loneliness, as her possessiveness spirals into frightening new realms.

A remarkable central performance by Sandy Dennis anchors this fascinating, haunting tale, anticipating Altman’s subsequent studies of female psychological breakdown, Images and 3 Women. Shot by László Kovács (Easy Rider, Five Easy Pieces) with Altman’s trademark long lenses and drifting zooms, as well as intriguing experimentation with sound, That Cold Day in the Park is a long-neglected gem from an American master. The Masters of Cinema Series is proud to present its UK home video premiere in a new Dual-Format edition.

– English subtitles for the deaf and hearing-impaired
– PLUS: A booklet featuring new writing and archival images