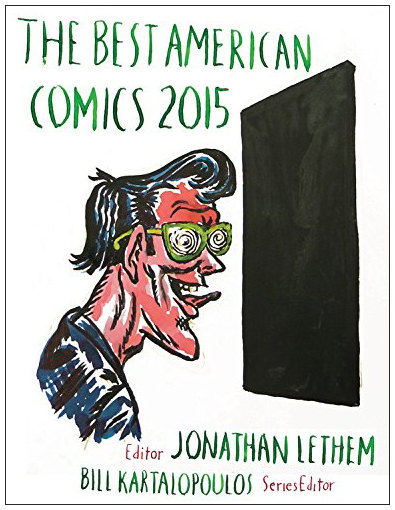 “As I know well from my own field, true vitality consists of stuff that’s further off the radar of general acclaim. The influx of raw arrivals. The deep cuts.”
—Jonathan Lethem, from the Introduction

Guest editor Jonathan Lethem brings both literary and comics credibility to his picks for the best graphic pieces of the year. Critically acclaimed author Jonathan Lethem is no stranger to comics; he revived Marvel’s cult classic Omega and brings both literary and comics sensibility to The Best American Comics 2015. The collection showcases the work of both established and up-and-coming contributors and highlights both fiction and non-fiction from graphic novels, pamphlet comics, newspapers, magazines, minicomics, and the Web.

JONATHAN LETHEM is the author of nine novels, including Motherless Brooklyn, The Fortress of Solitude, Gun, with Occasional Music, and most recently Dissident Gardens.

BILL KARTALOPOULOS is a Brooklyn-based comics critic, educator, curator, and editor. He teaches comics history at the School of Visual Arts. More information may be found at on-panel.com.