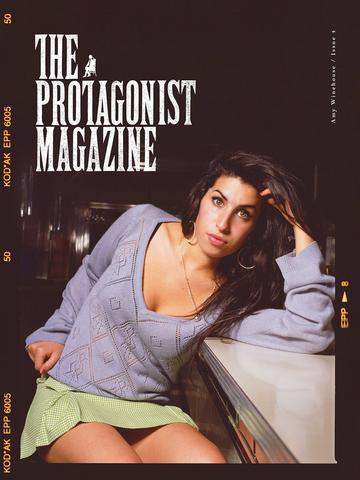 The Protagonist Magazine offers in-depth articles about and interviews with protagonists of stage and screen and the art world. London-based editors Ram Shergill and Daen Palma Huse offer an insight into the world of fine art and fashion photography, illustration and contemporary art in an eclectic mix. As a collectible hardback book, The Protagonist Magazine revives the tradition of luxury magazine publications such as The Yellow Book, which was published in the 1890s.

For this issue, the team at The Protagonist has concentrated on icons from the music industry on their limited edition collectible covers, with actors Andrea Riseborough, Alexander Vlahos and Tom Rhys Harries as well as artists like Andrew Salgado featured on the inside.

A lavish spread of number one recording artist and performer Paloma Faith has been produced, involving a special collaboration with artist and designer duo Whitaker Malem. The leather corset worn by Paloma Faith on the cover is a custom made piece called Hemaphroditus Armour that has been hand moulded in the same studio that has dressed Kate Moss and Halle Berry and Madonna in their James Bond film appearances. Whitaker Malem have created film costumes for Captain America, Jupiter Ascending and most recently Wonder Woman. In line with Paloma Faith’s new album The Architect, a visual utopian universe is created. A full album review is included in the issue.

The second cover is a very special cover edition featuring Amy Winehouse photographed by Editor in Chief Ram Shergill in 2003. The issue includes exclusive images that have never been seen before. The images of Amy Winehouse have only surfaced as the National Portrait Gallery, London UK, have acquired two of the images. A full-length article and interview with Ram Shergill tells the story of his day spent with Amy and highlights her unique talent.

The latest issue of The Protagonist Magazine also features fashion spreads created with fashion director Margherita Gardella and Seta Niland, former fashion editor at The Face magazine and Alexander McQueen collaborator. Inspirations have been the peacock as a bird that shows and parades its beauty – as well as the crow as a dark and mystical creature.

The exploration of nature and humankind is underlying in this compendium of visual aesthetic. Especially commissioned anthropomorphic and zoomorphic illustrations by Colin Verdi connect humans and animals as much as the fine artwork by Frida Wannerberger and Catherine Min, which interconnect with different photographic spreads ranging from explosive colours to fine photo-paintings and wetplate photography by Magda Kuca. Min’s dreamy illustrations illustrate an article by Dr. Birgitta Huse about travelling clothes, an exploration into attire for the global explorer.

This issue of The Protagonist is the perfect companion whether you are travelling across countries or letting your mind travel whilst sitting in your favourite chair at home. The Protagonist is filled with knowledge, animals, fashion, icons, art, illustration and a celebration of beauty that surrounds us.

You are The Protagonist of your own life!