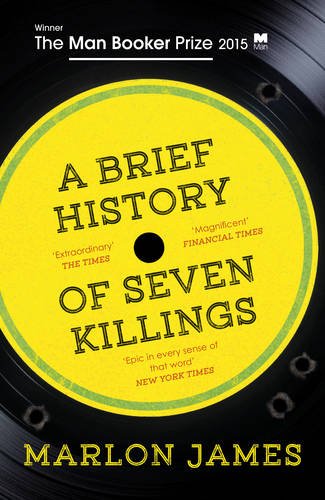 A Brief History of Seven Killings

WINNER of the Man Booker Prize 2015

‘Vast and vastly ambitious… much to admire…fascinating…the author’s imaginative and stylistic range are impressive.’ (Sunday Times)

‘It’s like a Tarantino remake of “The Harder They Come” but with a soundtrack by Bob Marley and a script by Oliver Stone and William Faulkner, with maybe a little creative boost from some primo ganja. It’s epic in every sense of that word: sweeping, mythic, over-the-top, colossal and dizzyingly complex. It’s also raw, dense, violent, scalding, darkly comic, exhilarating and exhausting – a testament to Mr. James’s vaulting ambition and prodigious talent.’ (Michiko Kakutani, New York Times)

From the acclaimed author of The Book of Night Women comes a dazzling display of masterful storytelling exploring this near-mythic event. Spanning three decades and crossing continents, A Brief History of Seven Killings chronicles the lives of a host of unforgettable characters – slum kids, drug lords, journalists, prostitutes, gunmen and even the CIA. Gripping and inventive, ambitious and mesmerising, A Brief History of Seven Killings is one of the most remarkable and extraordinary novels of the twenty-first century.