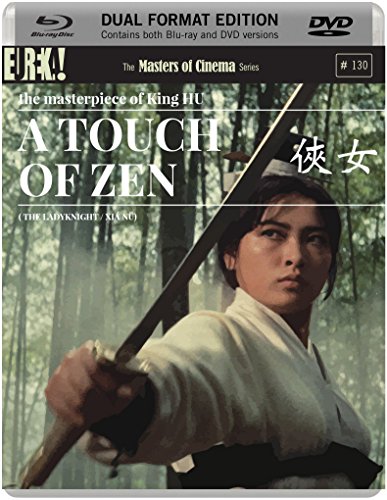 Widely regarded as the greatest martial arts epic of all time, A Touch of Zen won awards worldwide (including at Cannes), smashed box-office records and had an incalculable influence on the genre as a whole.

An unambitious painter named Gu (Shih Jun) lives with his mother in the vicinity of an abandoned mansion rumoured to be haunted. In actuality, the mansion has become a hiding place for the warrior Yang (Hsu Feng) and her own mother, both taking refuge following the assassination of their loyal minister father by the wicked eunuch Wei of East Chamber. After the eunuch sends an army to pursue the escapees, the group fortify the mansion with traps and false intimations of the terrifying ghosts within. But even after, things take yet more unsettling turns…

Famed for its iconic set pieces, including the central bamboo forest battle, A Touch of Zen is one of cinema’s truly peerless action sagas and the precursor par excellence of such modern wuxia films as Crouching Tiger, Hidden Dragon and House of Flying Daggers. The Masters of Cinema Series is proud to present King Hu’s masterpiece in a Dual Format edition.

– New 1080p transfer of the film on Blu-ray, with a progressive encode on the DVD
– Newly translated English subtitles
– Select scene commentary by critic and Asian cinema expert Tony Rayns
– Trailer
– 36-PAGE BOOKLET featuring Hu’s director statement from the Cannes film festival a 1975 interview with King Hu by Tony Rayns; the original short story the film is based on; the eight characteristics of ”the swordswoman” in King Hu’s films; and archival images