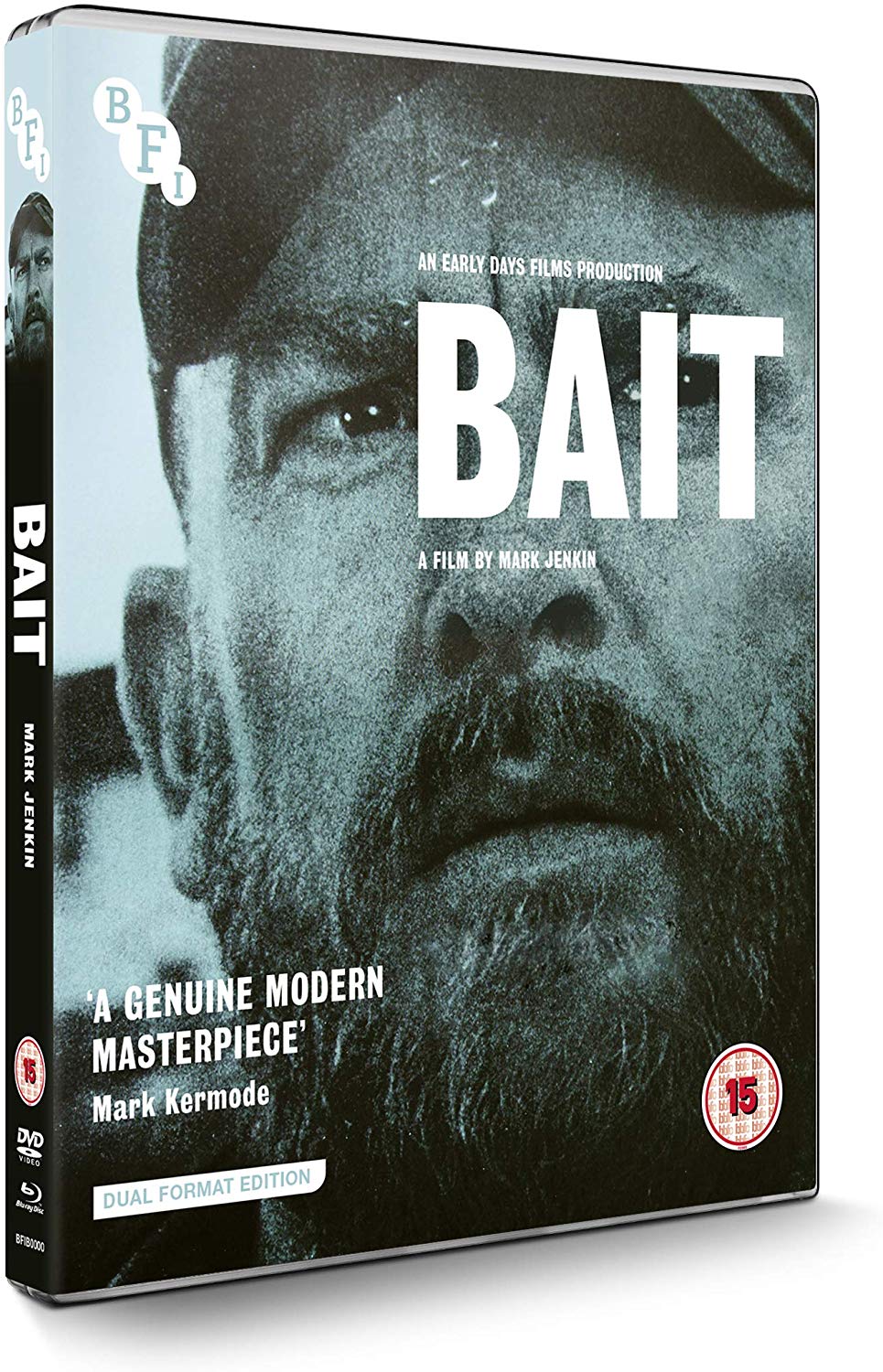 Modern-day Cornish fisherman Martin (Edward Rowe) is struggling to buy a boat while coping with family rivalry and the influx of London money, Airbnb and stag parties to his harbour village. The summer season brings simmering tensions between locals and newcomers to boiling point, with tragic consequences. Stunningly shot on a vintage 16mm camera using monochrome Kodak stock, Mark Jenkin’s Bait is a timely and funny, yet poignant new film that gets to the heart of a community facing up to unwelcome change.

Special features:
• Presented in High Definition and Standard Definition
• Newly recorded feature-length commentary with director Mark Jenkin and critic Mark Kermode
• Bait Q&A with director Mark Jenkin (2019, 33 mins): filmmaker Mark Jenkin in conversation with film critic Mark Kermode. Recorded at BFI Southbank, London, on 15th July 2019
• Dear Marianne (2015, 6 mins): a Cornishman’s travels in Ireland, through Wexford, Waterford and Cork in search of the familiar in another 2016 short film by Mark Jenkin
• The Essential Cornishman (2015, 6 mins): Mark Jenkin’s film is a homage to the spontaneous prose of The Beats, from the mythical Cornish west
• The Road to Zennor (2016, 2 mins): this short by Mark Jenkin is a poetic travelogue of a familiar journey to the small coastal town near St Ives
• The Saving of Bill Blewitt (1936, 25 mins): after the loss of their fishing boat, two fishermen of Mousehole, Cornwall, manage to save enough through National Savings to buy another in this charming docu-drama made by Harry Watt for the GPO Film Unit
• Scenes on the Cornish Riviera (c1912, 19 mins): This 1904 Great Western Railway-sponsored tour of the South West, visiting Saltash, Looe, Polperro, Newquay, Truro, Falmouth, The Lizard, Penzance and St Ives, provides an amazing visual record of Edwardian Cornwall
• Trailers
• **FIRST PRESSING ONLY** Fully illustrated booklet with writing by Mark Jenkin, Jason Wood, film critic Jessica Kiang and writer and curator Tara Judah, and full film credits

**** – A hypnotic take on tourists ruining Cornwall. Like FW Murnau directing an episode of Eastenders –The Guardian, Peter Bradshaw