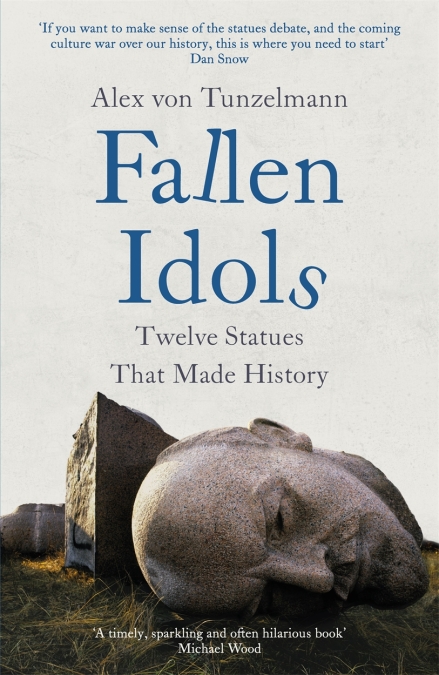 ‘Alex von Tunzelmann is one of the most gifted historians writing today. Brilliant and trenchant, witty and wise, Fallen Idols is a book you will adore, devour, and talk about to everyone you know. Hesitate no longer; buy this book.’ Suzannah Lipscomb, author, award-winning historian and broadcaster

‘Like all the best historians von Tunzelmann uses the past to explain what the hell is going on today. She does so with a flair, her signature mix of scholarship and succinctness that is so compelling. If you want to make sense of the statues debate, and the coming culture war over our history, this is where you need to start.’ Dan Snow

In the past few years, there has been a rush to topple statues. Across the United States of America, the United Kingdom, Belgium and elsewhere, Black Lives Matter protesters defaced and in some cases hauled down statues of slaveholders, Confederate icons, and imperialists.

In Bristol, Edward Colston was knocked off his plinth and hurled into the harbour. Robert E. Lee was covered in graffiti in Richmond, Virginia. Christopher Columbus was toppled in Minnesota, burned and thrown into a lake in Virginia, and beheaded in Massachusetts. King Leopold II of the Belgians was set on fire in Antwerp and doused in red paint in Ghent. Winston Churchill was daubed with the word ‘racist’ in London. The backlash from conservatives has been fast and intense.

Statues are one of the most visible forms of historical storytelling, maybe the most visible. The stories we tell are vital to how we as societies understand our past and make our future. The ultimate question is: ‘who controls history?’
FALLEN IDOLS tells the story of twelve toppled statues around the world. It will look at why they were put up in the first place; the stories they were intended to tell; the symbolism they came to embody; and the manner and consequences of their removal.

History is not erased when statues are pulled down. If anything, it is made.