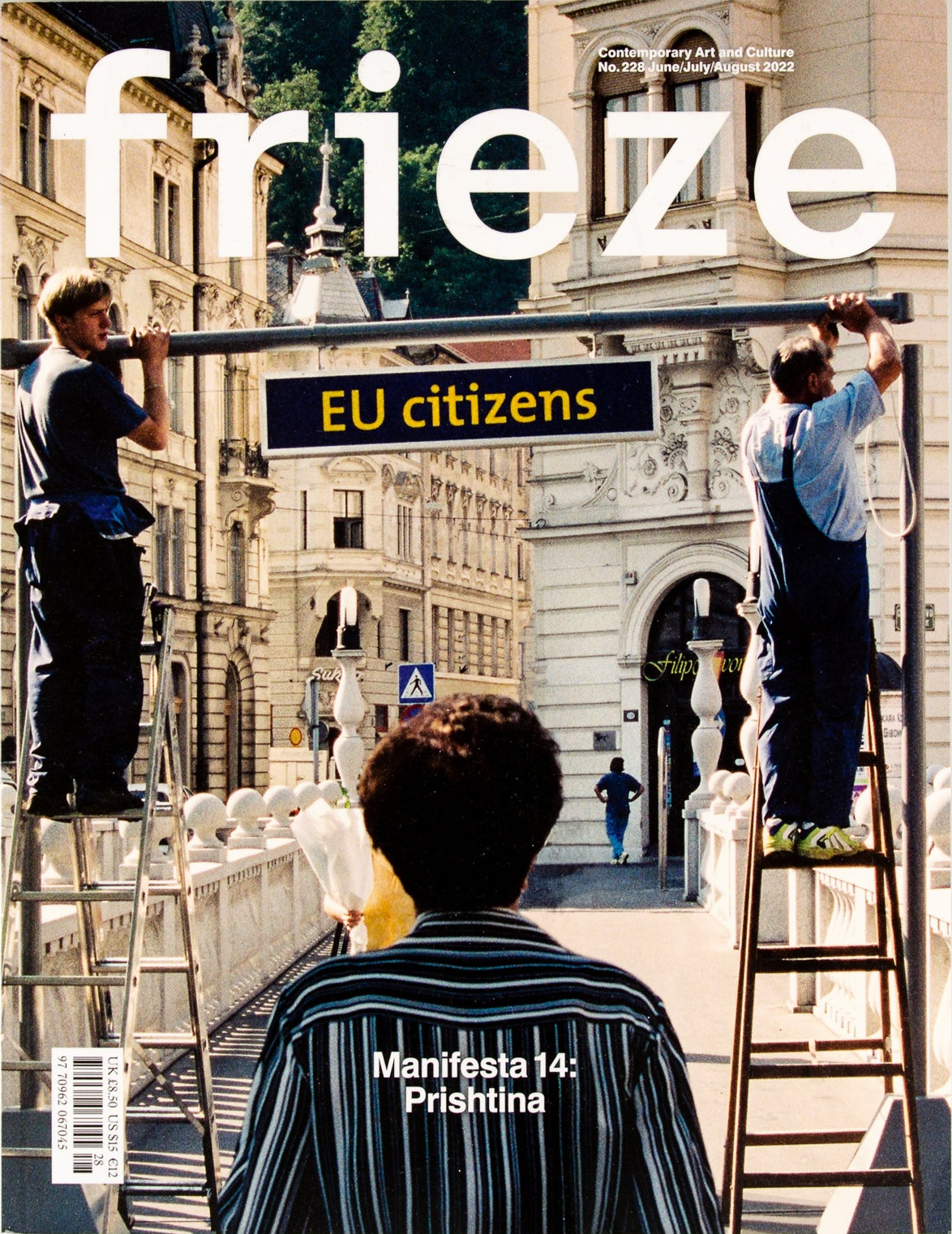 Insightful, intelligent and exquisitely designed, Frieze is the leading magazine in contemporary art and culture. Frieze profiles emerging artists and highlights new currents in art practice as well as offering a fresh perspective on more established artists. Including exhibition reviews, interviews, city reports and worldwide listings, the magazine is essential reading for anyone interested in visual culture.

In the summer issue of frieze, ahead of Manifesta in Kosovo, writer and curator Viktoria Draganova, curator Adela Demetja, professor Branislav Dimitrijević and artists Šejla Kamerić and Dardan Zhegrova consider what the exhibition might mean for art production and cross-border collaboration. Plus, Shiv Kotecha profiles artist Tony Cokes ahead of shows at Haus der Kunst and Kunstverein, Munich.

‘For Westerners, the word Balkans implied something very dangerous – a messy territory.’ – Branislav Dimitrijević. Thirty years after the break up of Yugoslavia and 22 years after Manifesta 3 in Ljubljana, the nomadic biennale is returning to the Balkans.

‘Police brutality, anti-Blackness, American war crimes: these are some of the violences that Cokes’s videos explicitly address.’ – Shiv Kotecha. Tony Cokes uses music and theory to challenge contemporary anti-Blackness and the legacies of US imperialism. Shiv Kotecha asks: Can you still dance to it?

In the features: Ela Bittencourt investigates the influence of surrealism in global cinema against a backdrop of political instability, focusing on three films, Sedmikrásky (Daisies, 1966), Bang Bang (1971) and Touki Bouki (The Journey of the Hyena, 1973); Victoria Adukwei Bulley speaks to Grada Kilomba, the 2021-22 resident artist at BoCA, Lisbon; in ‘1,500 words’, Trisha Low enters the world of performance artist Bob Flanagan via new work by Xandra Ibarra.

Vanessa Peterson speaks to members of Limbo Accra about their collaborative interventions into deserted building sites throughout the city; Orit Gat ventures into the treacherous world of online deserts; Kathleen Shields speaks to Robert Weathers, the groundskeeper tasked with maintaining Walter de Maria’s The Lightning Field (1977); Mariam Elnozahy examines the cultural offer and plans for Egypt’s new capital city. Plus, Róisín Tapponi considers the theme of thirst in Arab cinema.

Plus, Stephanie LaCava responds to a single work by Meriem Bennani. Finally, Going Up, Going Down charts what’s hot and what’s not in the global art world and the latest iteration of our Lonely Arts column.