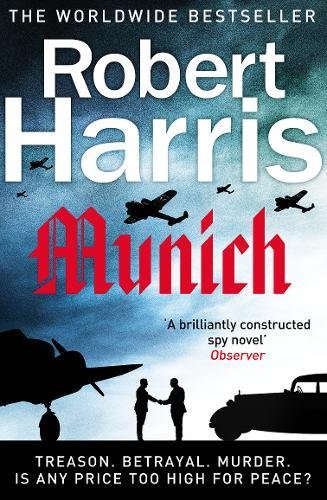 Hitler is determined to start a war. Chamberlain is desperate to preserve the peace.

They will meet in a city which forever afterwards will be notorious for what is about to take place.

As Chamberlain’s plane judders over the channel and the Fuhrer’s train steams south, two young men travel with their leaders. Former friends from a more peaceful time, they are now on opposing sides.

As Britain’s darkest hour approaches, the fate of millions could depend on them – and the secrets they’re hiding.

Spying. Betrayal. Murder. Is any price too high for peace?

‘Grips from start to finish … Superb’ Mail on Sunday

Robert Harris is the author of twelve bestselling novels: the Cicero Trilogy – Imperium, Lustrum and Dictator – Fatherland, Enigma, Archangel, Pompeii, The Ghost, The Fear Index, An Officer and a Spy, which won four prizes including the Walter Scott Prize for Historical Fiction, Conclave and most recently, Munich. Several of his books have been filmed, including The Ghost, which was directed by Roman Polanski. His work has been translated into thirty-seven languages and he is a Fellow of the Royal Society of Literature. He lives in West Berkshire with his wife, Gill Hornby.