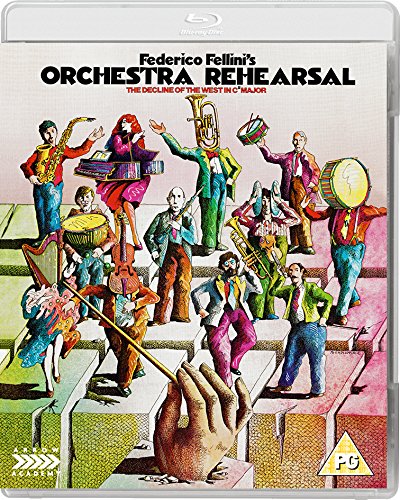 Made in 1978 for Italian television, Orchestra Rehearsal is possibly Fellini s most satirical and overtly political film.

An allegorical pseudo-documentary, the film depicts an Italian television crew s visit to a dilapidated auditorium (a converted 13th-century church) to meet an orchestra assembling to rehearse under the instruction of a tyrannical conductor. The TV crew interviews the various musicians who each speak lovingly about their chosen instruments. However, as petty squabbles break out amid the different factions of the ensemble, and the conductor berates his musicians, the meeting descends into anarchy and vandalism. A destructive crescendo ensues before the musicians regroup and play together once more in perfect harmony.

Abounding with its director s trademark rich imagery and expressive style, Orchestra Rehearsal marks the last collaboration between Fellini and the legendary composer Nino Rota (due to the latter s death in 1979) who provides one of his most beautiful themes in the film s conclusion.