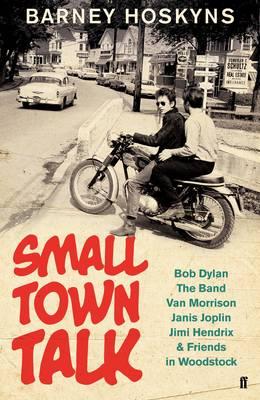 Think ‘Woodstock’ and the mind turns to the seminal 1969 festival that crowned a seismic decade of sex, drugs and rock ‘n’ roll. But Woodstock itself was over 60 miles from the site to which the fabled half a million flocked. So why the misnomer? Quite simply, Woodstock was already a key location in the Sixties rock landscape, the tiny Catskills town where Bob Dylan had holed up after his 1966 motorcycle accident.

In Small Town Talk, Barney Hoskyns recreates Woodstock’s community of brilliant dysfunctional musicians, opportunistic hippie capitalists and scheming dealers drawn to the area by Dylan and his sidekicks The Band. Central to the book’s narrative is the broodingly powerful presence of Albert Grossman, manager of Dylan, The Band, Janis Joplin and Todd Rundgren – and Big Daddy of a personal fiefdom in Bearsville that encompassed studios, restaurants and his own record label. Intertwined in the story are the Woodstock experiences of artists as diverse as Van Morrison, Jimi Hendrix, Paul Butterfield, Tim Hardin, Karen Dalton and Bobby Charles.

Drawing on first-hand interviews with the remaining key players in the scene, and on the period when he lived there himself in the 1990s, Hoskyns has produced an East Coast companion to his bestselling L.A. Canyon classic Hotel California – a richly absorbing study of a vital music scene in a revolutionary time and place.