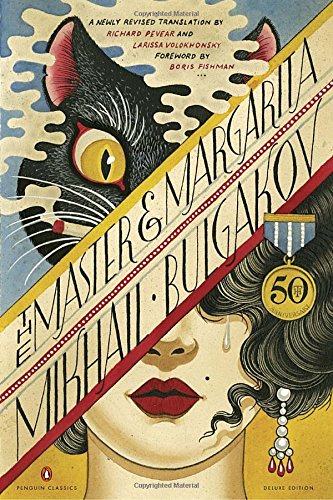 A 50th-anniversary Deluxe Edition of the incomparable 20th-century masterpiece of satire and fantasy, in a newly revised version of the acclaimed Pevear and Volokhonsky translation.

Nothing in the whole of literature compares with The Master and Margarita. One spring afternoon, the Devil, trailing fire and chaos in his wake, weaves himself out of the shadows and into Moscow. Mikhail Bulgakov’s fantastical, funny, and devastating satire of Soviet life combines two distinct yet interwoven parts, one set in contemporary Moscow, the other in ancient Jerusalem, each brimming with historical, imaginary, frightful, and wonderful characters. Written during the darkest days of Stalin’s reign, and finally published in 1966 and 1967, The Master and Margarita became a literary phenomenon, signaling artistic and spiritual freedom for Russians everywhere.

This newly revised translation, by the award-winning team of Pevear and Volokhonsky, is made from the complete and unabridged Russian text.

“A soaring, dazzling novel; an extraordinary fusion of wildly disparate elements. It is a concerto played simultaneously on the organ, the bagpipes, and a pennywhistle, while someone sets off fireworks between the players’ feet.”
—The New York Times