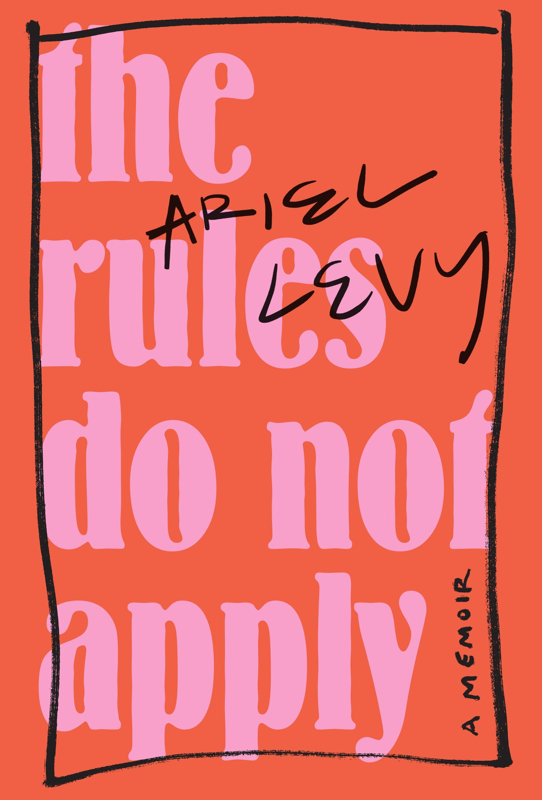 The Rules Do Not Apply: A Memoir

When Ariel Levy left for a reporting trip to Mongolia in 2012, she was pregnant, married, financially secure, and successful on her own terms. A month later, none of that was true.

Levy picks you up and hurls you through the story of how she built an unconventional life and then watched it fall apart with astonishing speed. Like much of her generation, she was raised to resist traditional rules–about work, about love, and about womanhood.

In this “deeply human and deeply moving” (The New York Times Book Review) memoir, Levy chronicles the adventure and heartbreak of being, in her own words, “a woman who is free to do whatever she chooses.” Her story of resilience becomes an unforgettable portrait of the shifting forces in our culture, of what has changed–and of what is eternal.

Praise for The Rules Do Not Apply

“Levy has the rare gift of seeing herself with fierce, unforgiving clarity. And she deploys prose to match, raw and agile. She plumbs the commotion deep within and takes the measure of her have-it-all generation.”–The Atlantic

“[The Rules Do Not Apply] is a short, sharp American memoir in the Mary Karr tradition of life-chronicling. Which is to say that Levy, like Karr, is a natural writer who is also as unsparing and bleakly hilarious as it’s possible to be about oneself. . . . I devoured her story in one sitting.”—Financial Times

“It’s an act of courage to hunt for meaning within grief, particularly if the search upends your life and shakes out the contents for all the world to sift through. Ariel Levy embarks on the hunt beautifully in her new memoir.”—Chicago Tribune

“I read it in one big messy gulp, because it is beautiful and heartbreaking and unruly and real. You should preorder it immediately so you can fall into her complicated, funny, and finely wrought world as soon as humanly possible.”–Lenny.com

“A thoroughly modern memoir, the elements of The Rules Do Not Apply seem plucked not from the script of Girls, which has also been exploring reproductive issues of late, but Transparent–even Portlandia.“—The New York Times

“Frank and unflinchingly sincere . . . A gut-wrenching, emotionally charged work of soul-baring writing in the spirit of Joan Didion, Helen Macdonald, and Elizabeth Gilbert, The Rules Do Not Apply is a must-read for women.”–Bustle

“Unflinching and intimate, wrenching and revelatory, Ariel Levy’s powerful memoir about love, loss, and finding one’s way shimmers with truth and heart on every page.”–Cheryl Strayed

“Every deep feeling a human is capable of will be shaken loose by this profound book. Ariel Levy has taken grief and made art out of it.”–David Sedaris

“Ariel Levy is a writer of uncompromising honesty, remarkable clarity, and surprising humor gathered from the wreckage of tragedy. Her account of life doing its darnedest to topple her, and her refusal to be knocked down, will leave you shaken and inspired. I am the better for having read this book.”–Lena Dunham