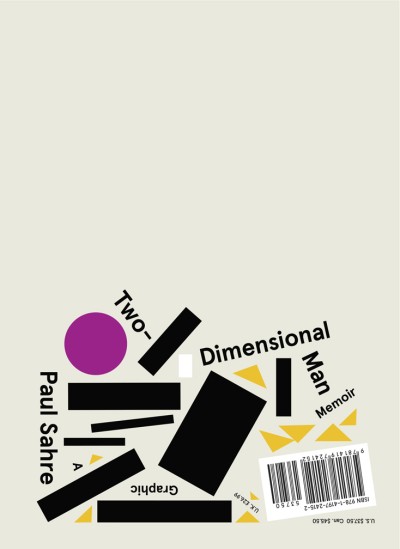 In Two-Dimensional Man, Paul Sahre shares deeply revealing stories that serve as the unlikely inspiration behind his extraordinary thirty-year design career. Sahre explores his mostly vain attempts to escape his “suburban Addams Family” upbringing and the death of his elephant-trainer brother. He also wrestles with the cosmic implications involved in operating a scanner, explains the disappearance of ice machines, analyzes a disastrous meeting with Steely Dan, and laments the typos, sunsets, and poor color choices that have shaped his work and point of view. Two-Dimensional Man portrays the designer’s life as one of constant questioning, inventing, failing, dreaming, and ultimately making.

“Paul Sahre has designed almost all of my book covers, and I have yet to write a book that’s as intuitively intelligent or aesthetically provocative as whatever cover he created for its face. This is the story of his intelligent, provocative life.”

“Smart, funny, and deeply affecting. Design great Paul Sahre has written the best sort of design book, namely: not a design book. Though you’ll learn more about design from this memoir than you’re likely to learn elsewhere and, along the way, pick up a few things about the AMC Gremlin, Steely Dan, Pee Wee football, some kind of meat sandwich called, evidently, ‘the spiedie,’ life in a circus, Kent State, German airport security, the effects of amphetamines, sign painting, doorways to alternate universes, and the tortuous and unavoidable tribulations of belonging to an American family.”

— Peter Mendelsund, designer and author of What We See When We Read

“It is a pure delight to hear Paul Sahre’s deep, wry voice throughout the pages of this book. Who knew he could write so wonderfully? The clarity and genius of his process is illuminated, as is the rarely seen but nigh-impossible path of getting anything beautiful printed or published. His anecdotes, much like his design, are rooted in a comfortable, almost commonplace sprawl, which suddenly rear into politics, poignancy and subversion.”

— Leanne Shapton, artist, designer, and author of Swimming Stories and Women in Clothes

“A gut wrenching and at times hilariously compelling look into a designer’s life. This is the only ‘design monograph’ in memory I could honestly characterize as a ‘page turner.’”

“A MUST READ for any designer just starting out, running on cruise-control, or completely tanking in this messy, fucked up, and glorious business.”

“This is the best indirect book about the language of design I’ve ever read.”

“In Two-Dimensional Man, Paul Sahre has stretched the form of design monographs. It is both monograph and a very personal autobiography. We understand how he felt about things, saw things, and how he used that unique vision later to become one of the most admired designers of his generation.”

“Part user’s guide, part impossibly vivid memoir, Two-Dimensional Man is a testament to being your life.”

“Paul Sahre poured his whole life into the echo chamber of design, and this is the story of the repercussions.”

Paul Sahre is a visual contributor to the New York Times and the author of a book on ham radio. He once built and destroyed a life-size monster truck hearse for the band They Might Be Giants. Sahre received his BFA and MFA from Kent State University, has taught at the School of Visual Arts for the past 13 years, and is an in-demand lecturer worldwide. He is a member of Alliance Graphique Internationale. He works in New York City.