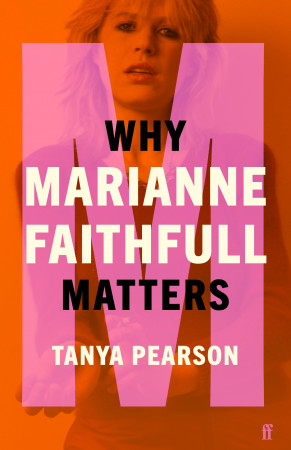 A remarkable feminist history and biography that features fragments from the five-decade career of an iconic artist.

‘Through this deeply personal take, the real significance of Faithfull as an irrepressible female icon shines through.’
SHINDIG


‘With vulnerability and a smart sense of humor, Tanya Pearson exposes the profoundly misogynistic music industry that abused Marianne Faithfull . . . heroic and hiliarious.’
JD SAMSON, of LeTigre and MEN

‘Witty, passioante, and provactive. Finally, a feminist appreciation for Marianne Faithfull.’
VIVIEN GOLDMAN, author of Revenge of the She-Punks: A Feminist Music History from Poly Styrene to Pussy Riot

First as a doe-eyed ingénue with ‘As Tears Go By’, then as a gravel-voiced phoenix rising from the ashes of the 1960s with a landmark punk album, Broken English, and finally as a genre-less icon, Marianne Faithfull carved her name into the history of rock ’n’ roll to chart a career spanning five decades and multiple detours.

Why, then, was Faithfull absent from the male-dominated history of the British Invasion?

Putting memoir on equal footing with biographical accounts, historian Tanya Pearson writes about Faithfull as an avid fan, recovered addict and queer musician at a crossroads. Whether exploring Faithfull’s rise to celebrity, her drug addiction and fall from grace as a spurned ‘muse’ or her reinvention as a sober, soulful chanteuse subverting all expectations for an ageing woman in music, Pearson reaffirms the deep connection between creator and listener in this remarkable feminist history of the iconic artist.