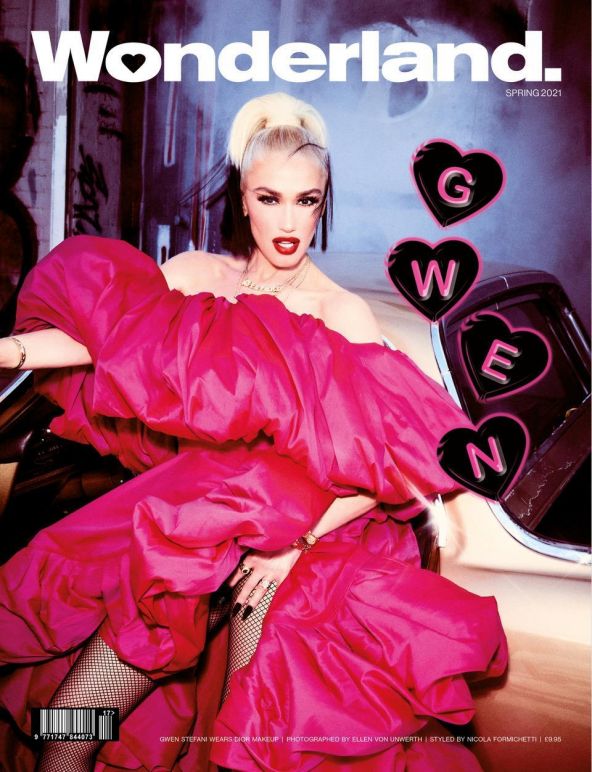 Wonderland is a uniquely positioned new, independent, bi-monthly publication for both men and women spotlightning contemporary visual culture- art, design, film  both the influences and developments, together with the very latest fashion, shot by some of the most innovative photographers working today. Assisting the readers instead rather than dictating to them, so that they may decide for themselves how to spend their time and their money.

Ushering in the dawn of a new year, a new album and a new era, cultural icon Gwen Stefani covers the Spring 2021 issue of Wonderland talking love, lockdown and making new music. The hitmaker has tried her hand at practically every genre on the map — from a fusion of ska, rock, and reggae in her early days as a No Doubt frontwoman, to oﬀerings ranging between pop and country as a leading solo entity — and at the end of last year, she announced her calamitous return to the musical fore with her latest single, “Let Me Reintroduce Myself”. In true Stefani fashion a fun and fantastical video followed, taking us on a playful visual retrospective of her most iconic looks — the varsity vest and fishnet pairing days of No Doubt’s “Just A Girl”, the classic 50s polka-dot masterpiece she dons in the video for “Don’t Speak”, and the oh-so-00s full-fringe glamour of “The Sweet Escape”. Tracing her career from her debut record Love. Angel. Music. Baby. to her recent collaborations with fiancé Blake Shelton, Stefani reflects on the evolution of her creative process, setting out her hopes for the year ahead and all the success to come.

Also covering the issue, Hollywood royalty Salma Hayek speaks to Camila Morrone about her illustrious career so far and new film Bliss, as well as fighting for progression in the industry, how happiness is rooted in simplicity and why, if you have a creative mind, you should never be bored.

Packed with all the rising stars to know across music, film, and fashion, elsewhere in these pages we meet supermodel Winnie Harlow, teen queen Maddie Ziegler, Euphoria actor Algee Smith and Fate: The Winx Saga star Danny Griffin. From New York, rising actress Whitney Peak lets us in on the top-secret filming process for the highly-anticipated Gossip Girl reboot, while London-based singer Tiana Major9 talks us through her upcoming releases and Chloë Grace Moretz catches up with her friend and collaborator Charlize Theron over Zoom.