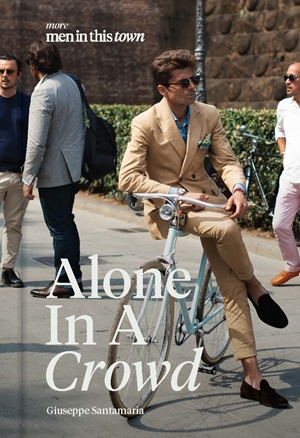 Alone in a Crowd: Men in this town

From the Men in this Town series comes Giuseppe Santamaria’s third book, Alone in a Crowd, once again turns the spotlight on men’s fashion in cities around the world – including Melbourne, Tokyo, London, Paris, Florence, Madrid, New York, his now home-town Sydney, and his childhood home, Toronto.

Some shots capture menswear enthusiasts outside the fashion week shows in respective cities, others celebrate the everyday style of men – on the streets, at work and at play. Regardless of the setting, Giuseppe’s approach has always been as an outsider looking in, observing a particular quality about his subjects’ personal style and how they hold themselves as they go about their day.

This collection – which includes contemporary urban looks, traditional sartorial style and everything in between – spans the author’s travels from 2014 to 2016, starting in New York and ending in Toronto.