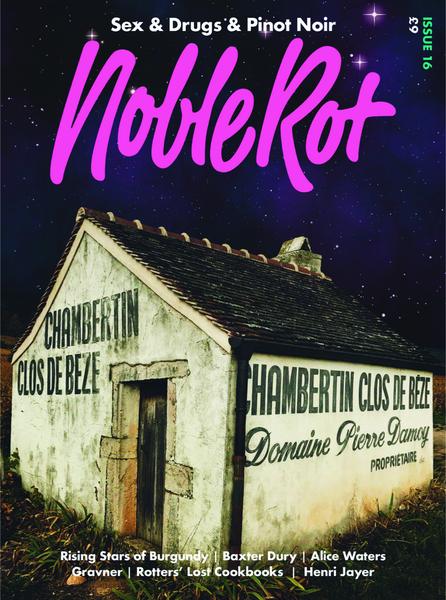 Noble Rot magazine attempts to join the dots between wine, music and food. We want to tell stories and inspire people to enjoy what they drink, eat and listen to. We is Mark Andrew and Dan Keeling and we started Noble Rot with the intention of giving young and/or alternative writers a platform to discuss contemporary culture from a fresh perspective.

The new instalment of Noble Rot is another righteous journey through the best in food and wine where we…
• Spotlight Burgundy’s next winemaking stars including Domaine Cecile Tremblay, Bernard Moreau and Sylvain Pataille.
• Listen in to Diana Henry interviewing Californian food trailblazer Alice Waters.
• Meet singer Baxter Dury to talk Loire reds, making the album of his career, and growing up around “bonkers” musical icon dad, Ian Dury.
• Uncover some mythical gastronomic texts in Rotters’ Lost Cookbooks. Written by the good and the great of British cuisine, these are the recipe books you almost certainly will not have on your shelves.
• Feature profiles on Joško Gravner, Henri Jayer, the Manchester kebab revolution and the world of super-deluxe wine tastings, with stories, reviews and musings from Marina O’Loughlin, Simon Hopkinson, Stephen Harris, Rowley Leigh, Russell Norman, Olia Hercules, Neal Martin and John Niven, among much more…
Show more
Close
Tag:Noble Rot
Share: Facebook Twitter Email