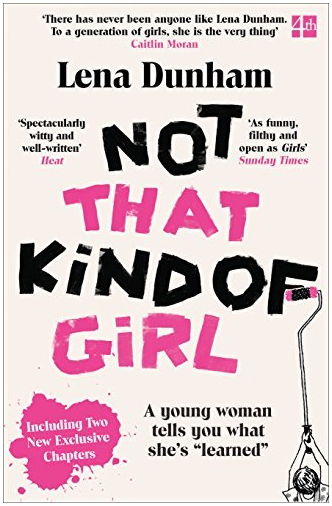 Not That Kind of Girl: A Young Woman Tells You What She’s “Learned”

For readers of Nora Ephron, Tina Fey, and David Sedaris, this hilarious, poignant, and extremely frank collection of personal essays confirms Lena Dunham – the acclaimed creator, producer, and star of HBO’s ‘Girls’ – as one of the brightest and most original writers working today.

“If I could take what I’ve learned and make one menial job easier for you, or prevent you from having the kind of sex where you feel you must keep your sneakers on in case you want to run away during the act, then every misstep of mine was worthwhile. I’m already predicting my future shame at thinking I had anything to offer you, but also my future glory in having stopped you from trying an expensive juice cleanse or thinking that it was your fault when the person you are dating suddenly backs away, intimidated by the clarity of your personal mission here on earth. No, I am not a sexpert, a psychologist, or a dietician. I am not a mother of three or the owner of a successful hosiery franchise. But I am a girl with a keen interest in having it all, and what follows are hopeful dispatches from the frontlines of that struggle.”

At only 23 years old, Lena Dunham wrote, directed and starred in the multi-award winning ‘Tiny Furniture’. She now stars in the HBO series, ‘Girls’, which she created and also serves as an executive producer and writer. Dunham graduated from Oberlin College in 2008 with a degree in Creative Writing and currently resides in New York City.

‘It’s not Lena Dunham’s candour that makes me gasp. Rather, it’s her writing – which is full of surprises where you least expect them. This is a fine, subversive book’ – David Sedaris

‘Very few women have become famous for being who they actually are, nuanced and imperfect. When honesty happens, it’s usually couched in self-ridicule or self-help. Dunham doesn’t apologise like that – she simply tells her story as if it might be interesting. The result is shocking and radical because it is utterly familiar. ‘Not That Kind of Girl’ is hilarious, artful, and staggeringly intimate; I read it shivering with recognition’ – Miranda July