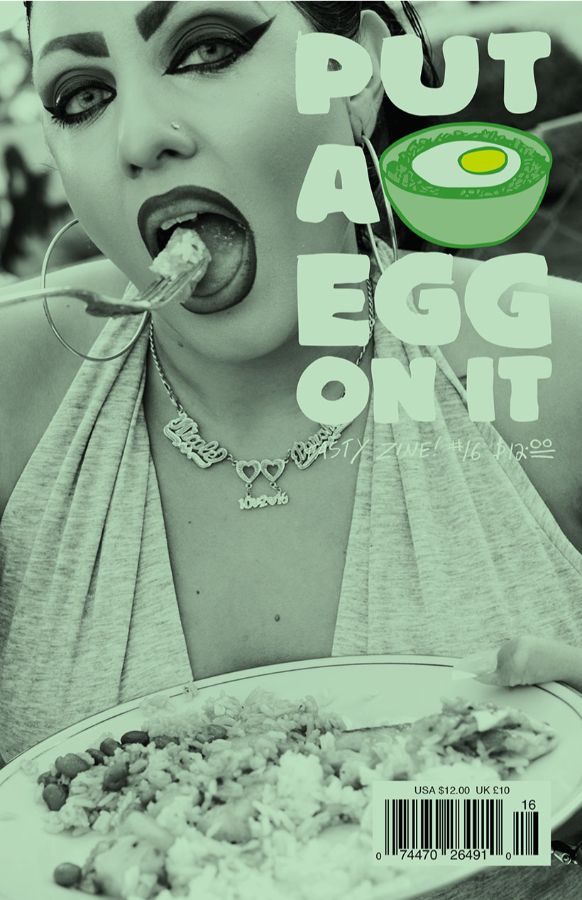 Put a Egg On It zine is all about food, cooking and the communal joys of eating with friends and family. The magazine features personal essays, cooking tips, photo essays of dinner parties and special art projects. Every issue also includes a themed recipe section.

In this issue:
Put A Egg On It reaches a SWEET issue #16! We munch about with iconic writer Vince Aletti and confab over fried red snapper, sofrito and plantains with artists Billy Sullivan, Ava Berlin and John Cameron Mitchell! This issue also features Maria Manhattan’s exhibit The Box Lunch, an irreverent take on Judy Chicago’s The Dinner Party; a Staten Island cookout and… VHS Cuisine?! Wait, there’s more! Kimberly Chou Tsun An’s tale of the Taiwanese diaspora in the suburbs of Detroit and their trips to Canada for dim sum and groceries; Gretchen Mahnkopf’s New Orleans observations while bartending at one of the city’s premier dive bars – The Abbey; Alicia Kennedy’s ruminations on being a cocktail writer from Long Island and how its namesake drink, the Long Island Iced Tea, haunts her. Contributors also include Adrain Chesser, Anna Dunn, Nate Doyle, Damien Florébert Cuypers, Ramsey Ess, Elisenda Fontarnau, DingDing Hu, Amelie Kang, Mike Reddy, Jennifer Robichaux, Elazar Sontag and Carter Wilson! The recipe section is all SMALL PLATES! You can say tapas if you like, though. It’s fierce being green.