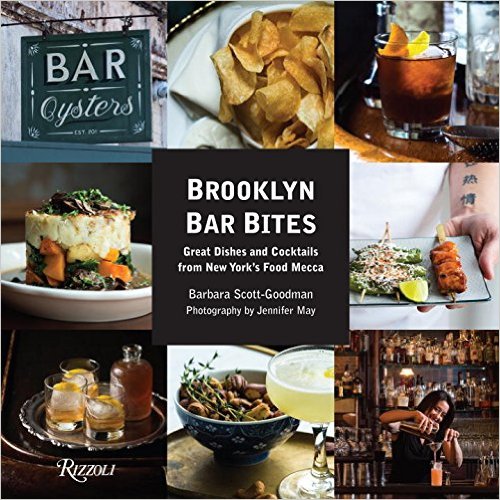 This lively cookbook celebrates Brooklyn’s happening bar culture—from the mixologists who craft classic and original cocktails to the talented chefs who create delicious dishes made with fresh-from-the-market ingredients to accompany the drinks. Brooklyn Bar Bites covers the offerings of the current crop of popular neighborhood bars, cocktail lounges, and restaurants. A variety of classic and inventive cocktails from Brooklyn’s best bartenders—from a Classic Old Fashioned to a Kimchi Bloody Mary—are showcased. The accompanying dishes range from simple bar snacks, sandwiches, and crostini to small plates. Recipes include Grilled Scallop Ceviche, Ricotta Crostini, and Southern-Style Crispy Pimento Cheese. This entertaining cookbook is also filled with anecdotes about the eateries and their locales. Among the bars featured are the Long Island Bar, a once-gritty riverfront joint that is now an elegant cocktail lounge; Clover Club, with its old-world speakeasy vibe; and Williamsburg’s chic Maison Premiere, known for its oyster bar happy hour and absinthe cocktail menu. With stunning food and location photography, Brooklyn Bar Bites is the perfect companion for food lovers and a must for home mixologists.

Brooklyn-based Barbara Scott-Goodman is an author, food writer, and designer. She has authored many books including Wine Bites and The Beach House Cookbook. Her original recipes have been included in such cookbooks as Bon Appétit’s Fast, Easy, Fresh and The New York Cookbook, as well as in numerous publications including Bon Appetit. Jennifer May’s photographs have appeared in many cookbooks including The Chelsea Market Cookbook, and Susan Feniger’s Street Food, as well as in such publications as Bon Appétit and Food & Wine.